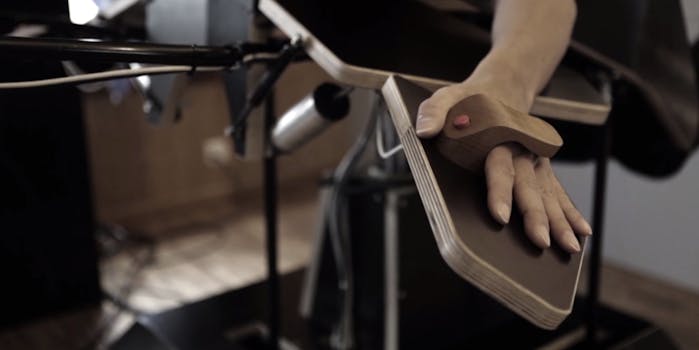 But you have to hum "I Believe I Can Fly" while you use it.

On the list of most desired superpowers, you’ve got your invisibility and your underwater breathing, sure, but then there’s the elegance of the air: human flight. Thanks to the virtual reality powers of Oculus Rift and a carefully engineered table by Vimeo user maxR, we’re one step closer.

MaxR has been posting videos of his team’s progress at Zurich University of the Arts quietly for two months now, including a test of the wing-tip technology and a little kid trying it out, but it’s this full teaser, complete with its ethereal music, that’s snagged our attention.

Sure, you might look a little ridiculous belly-down on what appears to be an elaborate cross between a desk and some sadistic gym equipment, but if you’re convinced you’re serenely soaring through the sky, would you care? Engadget reports that the fan out in front does more than just whip your hair back and forth, too; you’ll be subject to wafting scents of whatever’s “below” you, so be sure to dodge the cow pastures.

That is, if you ever get the chance to try it out. It’s still just an art installation in Switzerland.