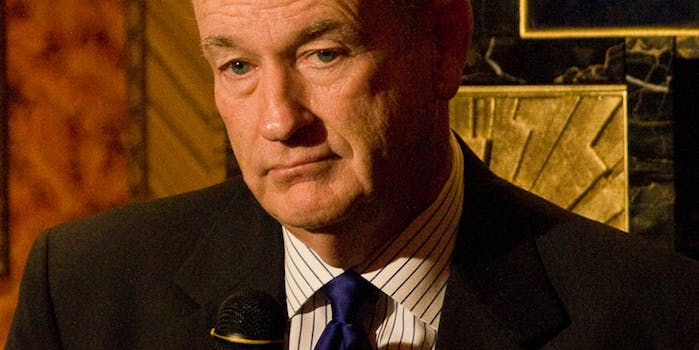 O'Reilly's takes are always the hottest.

On a wide variety of topics—including gay marriage, doctor-assisted suicide, stem-cell research, the death penalty, abortion, and medical testing on animals—Gallup found that the public had moved moved significantly to the left since it began asking about those issues in 2001.

O’Reilly was not particularly pleased with this turn of events.

“More Americans are simply ignorant of the consequences involving social behavior,” said O’Reilly, who likely paid out millions of dollars to settle a sexual-harassment lawsuit brought by one of his show’s producers. The suit alleged a number of lurid details about O’Reilly’s conduct, including a sexual fantasy involving a falafel.

O’Reilly pinned the blame for America’s moral decline on the Internet.

“The rise of the net has taken people away from the real world and put them in a fantasy world,” charged O’Reilly, who repeatedly claimed that he had won two Peabody Awards for hosting Inside Edition when it turned out the correct number was zero.

Caught in his lie, O’Reilly then asserted that he had misspoke and was actually talking about a Polk Award, which the show won the year after O’Reilly left.

“I believe only about 50 percent of the American people take the time to understand important issues,” continued O’Reilly, who once argued in favor of the existence of God by pointing to the flow of tides as an unknowable mystery of the universe only explainable through the concept of divine intervention.

Tides are caused by the moon’s gravitational pull on Earth’s oceans.

O’Reilly continued his recent jeremiad against Gallup’s data by charging that the problem with social liberals is that they aren’t intelligent enough to understand the consequences of their belief system.

“They’re simpletons unwilling and unable to discipline themselves into formulating a philosophy of life,” concluded O’Reilly, whose daughter recounted an incident in recently revealed court documents when she saw her father “choking her mom” while “dragging her down some stairs.”