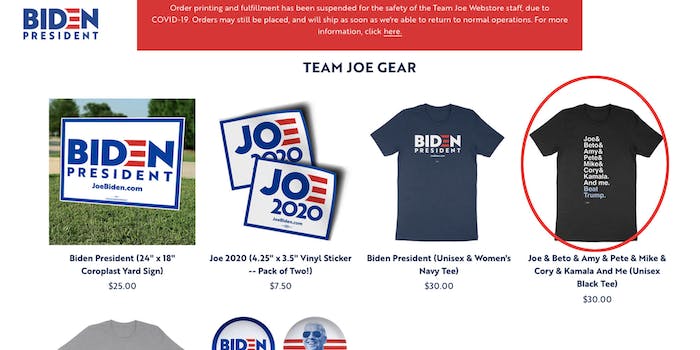 Somehow, against what seemed like the most improbable of odds, former Vice President Joe Biden emerged victorious in the 2020 Democratic primaries—beating out over two dozen candidates.

For better or worse, we now have to look forward to a November showdown that pits America’s senile grandfather against America’s racist (and, also senile) grandfather. In what undoubtedly adds insult to injury to people who supported those other candidates, a new Biden shirt in the Team Joe store is rubbing that fact in our collective faces.

The Biden shirt entered our collective consciousnesses when it began popping up on Twitter this week, which uses the popular name listing and ampersand format that’s been around for years now. (Fun fact! It apparently originated as a Beatles “John & Paul & Ringo & George” T-shirt designed by an Amsterdam design studio in 2001!)

Unfortunately, there are, uh, a few glaring omissions, as software developer Danny Page first pointed out.

Now, it’s possible that the Biden shirt was designed before Sen. Elizabeth Warren (D-Mass.) and Sen. Bernie Sanders (I-Vt.) begrudgingly handed over their endorsements earlier this month. Not to mention, Obama?? But like, maybe they could have just waited to add the shirt to the store? Or better yet, just 86 the thing from the get-go?

For anyone looking to make a splash in quarantine while wearing their personal endorsement literally on the chest, the 100% cotton, unisex tee will set you back a $30 donation to Biden for President. Not a bad price to pay for a Biden shirt as oblivious as the man himself.