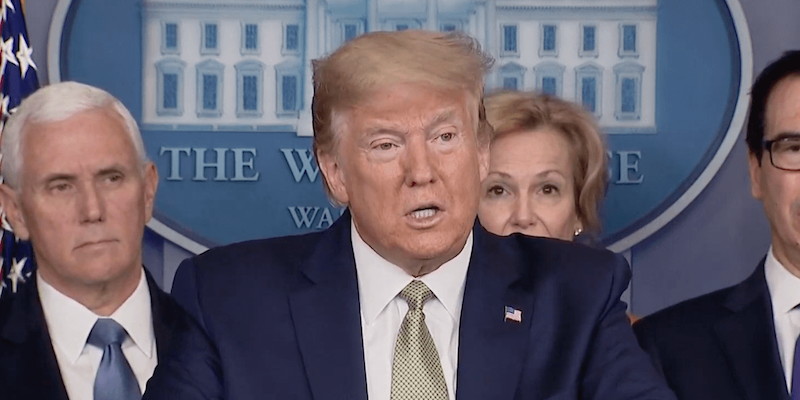 Trump, White House refuse to back down from racist framing of coronavirus

Trump insisted he had to keep doing it.

On Monday afternoon, President Donald Trump rated his response to the coronavirus (COVID-19) a 10 out of 10. Many would disagree after he referred to the virus as the “Chinese Virus” in a tweet later that day.

Throughout Trump’s prevention efforts, he has subtly promoted racism against Chinese people with his language around the virus. The Daily Dot first reported on his phrasing when he retweeted a post that referred to the coronavirus as the “China Virus.”

Now, his intentions are clear as he used the phrase himself in a tweet on Monday.

“The United States will be powerfully supporting those industries, like Airlines and others, that are particularly affected by the Chinese Virus. We will be stronger than ever before!” Trump tweeted.

Critics immediately jumped on the xenophobic comment. Some were even expecting it, coming after Trump finally took a solemn tone in a press conference before then.

Famous chef David Chang, a Korean-American, was among the critics. He has been a longstanding advocate against racism directed toward Asians in the food industry.

“This racist fuck face,” Chang began. “I can almost see this asshole granting aid only to giant fast food corporations. The greasy shit he stuffs his face with daily. Why would he want to help any immigrant restaurants? or god forbid a chinese or Mexican restaurant.”

This morning, Trump used the phrase a second time.

Meanwhile, CBS News White House Correspondent Weijia Jiang tweeted that Trump was not the only one in the White House using racist slurs to refer to the virus.

“This morning a White House official referred to #Coronavirus as the “Kung-Flu” to my face. Makes me wonder what they’re calling it behind my back,” Jiang tweeted.

Trump’s followers are praising the president for his remarks.

“THANK YOU for calling the virus what it is—a Chinese virus. CHINA is responsible for all of this chaos, carnage, and costs. They must be held accountable,” @thebradfordfile tweeted.

However, the World Health Organization has made it clear that labeling COVID-19 as Chinese is a harmful stigma.

“Since the emergence of #COVID19 we have seen instances of public stigmatization among specific populations and the rise of harmful stereotypes,” @WHO tweeted in February.

It’s Asian Americans that are seeing the real consequences of the president’s framing. On Wednesday, an Asian man was kicked in the back in a supposed hate crime in New York City. The New York Post reported that the suspect allegedly yelled “fucking Chinese coronavirus” during the attack.

It’s just one of many racist reports against Asians amid the coronavirus pandemic.

The Trump administration was unable to respond to a request for comment by publication.

At a press conference today, Trump was asked about using the phrase, and he said, “I have to call it where it came from … it’s a very accurate term” and cited reports that China was trying to place the blame for the virus on the U.S. military.