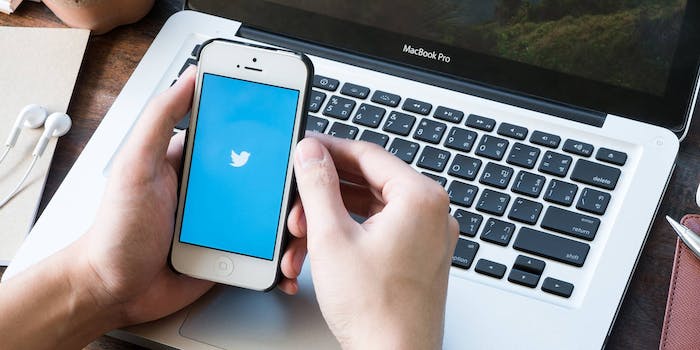 All quiet on the Apple front.

Want to know what Apple tweeted today? Nothing, at least not in the traditional sense.

Apple joined Twitter back in 2011, and since then its official corporate handle hasn’t seen much action until Friday.

That’s when the company’s Twitter handle started to show signs of life. A shiny new Apple logo replaced the standard egg avatar, a background image was added to the page, and the account was given verified status. This sent the twitterverse into a frenzy. And the account went from about 44,000 followers to over 194,000 in less than 24 hours. But why now?

Apple’s recent Twitter activity has stirred up speculation that the company may plan to livetweet its new iPhone announcement on Sept. 7th. It makes total sense. If you’ve ever tuned into an Apple announcement livestream, you’ve probably experienced connectivity issue on the company’s site. Livetweeting could function as a way to alleviate those breaks in streaming.

September 7 at 10 a.m. PT
Watch the event on https://t.co/yLa2e4Xr2R.
RT for a reminder on event day. #AppleEvent pic.twitter.com/e9MHNkLeoi

@bryanclark thank you.
We’ll send you a reminder shortly before the event.
See you on the 7th. pic.twitter.com/0H1jR3MteP

The above tweets fail to appear on Apple’s timeline yet have been promoted to users since hitting the twitterverse. As The Next Web notes, this tactic of utilizing “dark tweets” has similarly been employed by Samsung back in Feb.

It seems to be a strategic move for Apple, one that could potentially increase distribution of their product announcements and open the tech company up to a wider audience.

That still doesn’t fully explain why Apple hasn’t used its Twitter account for so many years. If the handle nearly quadrupled its followers in just one day, imagine how many followers and potential new customers the company could have amassed on the platform in the last five years?

Apple has separate Twitter handles for Apple News, Apple Music, and its support services that are—surprise, surprise—very active. Apple News has only had its Twitter handle for a little over a year and it’s already racked up about 948 tweets, compared to the Apple Support handle which was created around the same time and has over 149K posts.

Apple Music joined Twitter all the way back in 2009 which explains why it has the most followers of the three accounts. The Apple social media team tweets about 10+ times a day from the music handle and, since the account was created, over 25,000 tweets have been sent. Thus the company’s other handles allow it to not only speak to its followers but also makes it easier for the tech giant to create targeted content for specific segments of its audience, something a general corporate handle can’t really do.

This is further proof the company recognizes the value of Twitter when it comes to building relationships with its customers.

We won’t know for sure what Apple has planned for its newly active official Twitter handle until the company makes an announcement that appears on its timeline, but let me speak for all Apple followers when I say: Step out of the darkness and into the light. Come on, Apple, tweet something already.