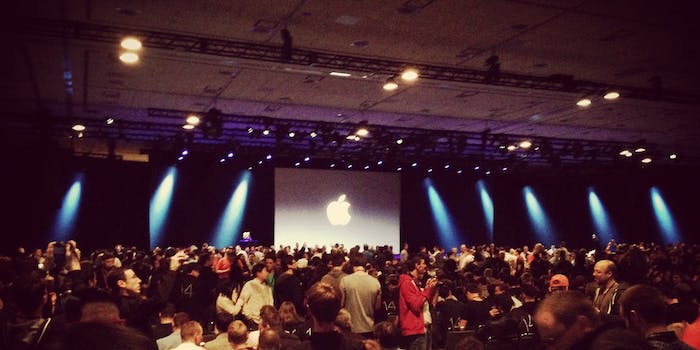 Getting to know iOS 8: The eight things you need to know

Apple's latest update is a doozy.

At WWDC today, Apple released iOS 8, the latest version of its mobile software. Duck-face selfies were taken and WhatsApp founders were pissed off and a lot of new features were introduced. Here are eight of the most important debuts.

You can now install any keyboard you want.

Apple’s world is less walled-off than it used to be, and the company will now let users download the third-party keyboard of their choosing.

Predictive text is certainly nothing new, but Apple promises to put its own spin on it. QuickType will offer a predictive formula that will learn from the texter. (Maybe it’ll finally figure out when I mean “were” and when I mean “we’re.”) It will even make adjustments based on who the texter is sending a message to, suggesting more formal language for communiques with bosses and more informal language for messages sent to friends. This means Apple will be monitoring your messages, but Senior Vice President of Software Engineering and gregarious silver fox Craig Federighi emphasized that they’d avoid keeping the learned information local. “All the learning is done local to the device and none of your keystrokes leave the device,” Federighi said.

No word yet on whether it’ll make sexting better or worse.

Siri and Shazam got married.

Siri will now be able to tell you which song you’re listening to, thanks to Shazam integration. Whether this will hurt engagement with Shazam’s standalone app is a question Shazam’s team probably should’ve seriously considered before making this deal (and likely did, but who knows?). This is bad news for Facebook, which just introduced its own Shazam-like audio recognition feature. It’s also bad news for people uncomfortable with the idea that their phone is listening to them at all times: Siri will now respond to users whenever they say “Hey, Siri” even when they haven’t opened the application.

The family that buys apps together, plays together.

Family Sharing will allow users to link up to six devices onto one credit card, so moms and dads can share their books, movies, music, and other purchases with their kids. To prevent wayward tweens from racking up big bills with in-app purchases, Apple instituted a parental permission function. Devices carried by children will send parents’ phones and tablets a request to make purchases. This could be a blow to freemium games that entice kids to spend more to play better, since I’d imagine there’s a sizable chunk of income flowing in from surreptitiously purchased add-ons.

OK, I just pulled that stat from nowhere. But Apple’s HealthKit is definitely an interesting development for mobile medicine. The Health app will let users input information about their medical history, and will collect body metrics like heart rate and blood pressure, as well as information about diet and exercise habits. It will monitor these metrics, and can alert doctors when they become dangerous, essentially turning into an automated 911 alarm. The app will share the information with HealthKit, which is a cloud platform that can collect other metrics from third-party apps (like Nike+, which is prepping integration). This could be enormously helpful, especially for people with chronic health concerns. For those with chronic privacy concerns, it might sound more like a nightmare.

Are group messages driving you crazy? There’s an escape hatch.

You’ll be able to leave a group message with iOS 8. You can also put a “Do Not Disturb” message up on specific (annoying) chat threads, which will stop notifications without taking you out of the chatter altogether. For people reluctantly involved in bachelorette party planning, this is the single most important update to any mobile software ever.

Apple introduced self-destructing messages from within iMessage, snaking Snapchat’s distinctive disappearing feature. Users will be able to share messages, videos, audio, and photos for an hour, a day, or indefinitely. I’d wager that “indefinitely” is how long Evan Spiegel will hold a grudge against Apple for ripping him off.

Dropbox could get drop-kicked with iCloud Drive.

Cloud drives are old news, and Apple is very late to a crowded party. But Apple is also Apple, so this matters: The company’s new cloud drive will share and synchronize documents between iOS, OS X, and Windows, and it’ll support third-party document providers as well. The first 5 GB are free (to contrast, Dropbox gives users 2 GB of free space, while Google offers 15 GB between Drive and Gmail and its other services).

We have to wait until the fall until the software update gets a wide release. If you’re really eager, try to get on the beta testing (it’ll run you $99 if you’re not a developer).

Photo via Mark Nijdam/Flickr (CC BY 2.0)