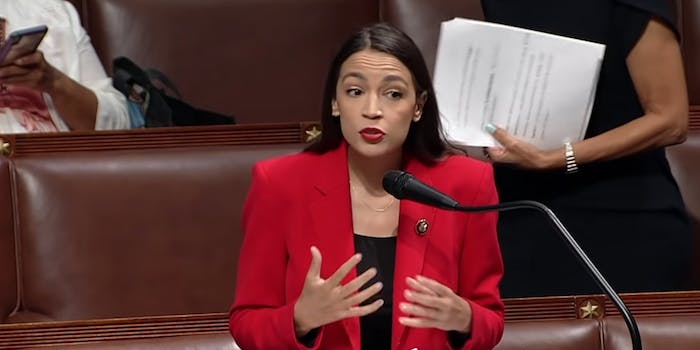 Conservatives on Wednesday accused Rep. Alexandria Ocasio-Cortez (D-N.Y.) of lying about her presence in the Capitol during January’s violent insurrection.

The allegation was popularized on Twitter by far-right commentator Jack Posobiec, who shared an article from RedState accusing Ocasio-Cortez of not being in the Capitol during the riot.

Citing an Instagram Live video from Ocasio-Cortez, RedState notes that the congresswoman claimed to be in her office and not near the rotunda.

The term #AlexandriaOcasioSmollett—a reference Jussie Smollett, the actor accused of fabricating a hate crime against himself—began trending on Twitter as a result.

Ocasio-Cortez responded by asserting that RedState’s narrative takes advantage of readers’ lack of understanding of the Capitol’s layout.

“This is the latest manipulative take on the right. They are manipulating the fact that most people don’t know the layout of the Capitol complex,” she said. “We were all on the Capitol complex – the attack wasn’t just on the dome. The bombs Trump supporters planted surrounded our offices too.”

Ocasio-Cortez further noted that the Capitol building itself wasn’t the only part of the complex to be targeted by supporters of President Donald Trump, who overran the area in an attempt to overturn the results of the 2020 presidential election. Rioters on the ground were also overheard repeatedly asking for the location of certain politicians who they wished to execute.

“People were trying to rush and infiltrate our office buildings – that’s why we had to get evacuated in the first place,” Ocasio-Cortez tweeted. “The attempts of attackers & publicly available communications show how they tried to gain access and share location info on finding members for physical harm.”

But the explanation did little to quell conservatives’ fervor. Posobiec weighed back into the issue by posting a map of the Capitol grounds, arguing that the congresswoman’s office was far from any danger.

Ocasio-Cortez said that Posobiec’s map was filled with errors and failed to provide any context on the location of rioters.

“This isn’t a fact check at all. Your arrows aren’t accurate. They lie about where the mob stormed & place them further away than it was,” she said. “You also fail to the convey *multiple* areas people were trying to storm. It wasn’t 1. You also failed to show tunnels. Poor job all around.”

Other prominent conservatives also began promoting the claim, including Benny Johnson, a reporter for the far-right outlet Newsmax.

“The ratio here,” Benny said in a response to Ocasio-Cortez. “How embarrassing for #AlexandriaOcasioSmollett.”

The Capitol riot, which came after weeks of false claims regarding widespread voter fraud were shared online, led to the death of five people.