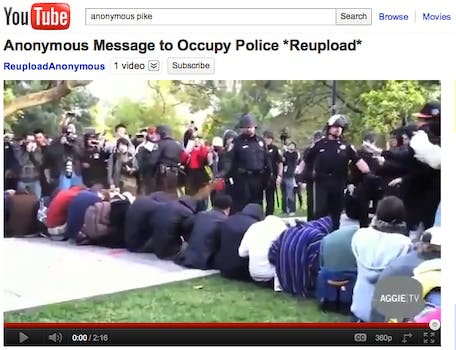 A law enforcement official responds to the release by Anonymous of private information about the officer involved in the UC-Davis incident.

Hackers claiming to be members of the group Anonymous flooded YouTube and social networks with videos that reveal the phone numbers and home address of the University of California-Davis police officer involved in the pepper spraying of Occupy protesters last week.

“Flood his home with pizza deliveries and junk mail,” a voice tells viewers in a version of the video that gives out Lt. John Pike’s home and cell phone numbers, his home address, his Skype account, and his work email address.

Once known primarily for denial of service attacks that took down Web sites ranging from Amazon.com to the Church of Scientology, Anonymous members in recent months have increasingly turned to using their hacking skills to release private and classified information about its targets. As reported last week by the Daily Dot, Antisec, an offshoot of Anonymous, released 38,000 personal emails from government officials working in Computer Crime Investigations.

Long a proponent of civil disobedience, Anonymous has maintained a regular presence at Occupy protests around the world.

“That’s scary; I can’t imagine what that must be like for the guy,” said one law enforcement officer, who declined to comment on the specifics of the Pike incident because he had only seen the video and had not read any of the internal reports or spoken with any of the people involved. He also asked that his name or law enforcement agency not be released out of fear of retaliation.

“Despite what we’ve all seen, I can’t say whether or not what he did was justified or not. It’s just not my place to comment on something like that,” the officer said. “But I can say that I would be very worried if that was my information going all over the Internet. Some people may get a laugh out of sending pizzas to his house or prank calling him. But some people may take it further than that, and that’s why this worries me so much.”

Law enforcement officers have generally maintained a need to keep their personal information private, for fear of reprisal from suspects and other people they have arrested. An unnamed source in the UC-Davis police department told the New York Daily News they were aware of Anonymous’ threats against Pike.

Video taken at last week’s protest show Pike calmly pepper spraying a group of protesters who were seated and not resisting. Images of the incident began spreading through social networks almost instantly and have placed the UC-Davis police department at the center of controversy. Pike has since become the subject of a meme and Etsy shirt, while protesters have even flooded the comments section for a pepper spray available on Amazon.

Students at all 10 campuses of the University of California system have called for a one-day strike on Monday, and the chancellor at UC-Davis is under pressure to resign as a result of the incident.

Voicemail announcements on both numbers given out in the video identify Pike as the owner. Both mailboxes were full Wednesday morning, according to automated messages.

In the videos, Anonymous warns it will release the personal information of other police officers identified as committing brutal acts against Occupy protesters. Much of the information being released by Anonymous and other groups, including 2010 salary information, is readily available on the Internet and through public records requests.

Anonymous, however, brings a worldwide network that has proven effective at garnering publicity for its causes to the effort to distribute that information.