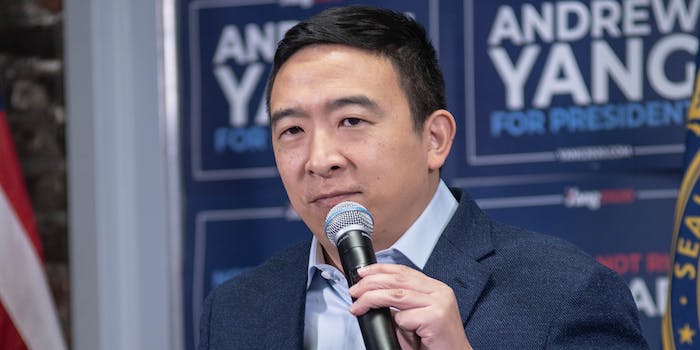 He criticized the boycott, divestment, and sanctions movement.

Andrew Yang, the former 2020 democratic presidential candidate and now candidate for New York City mayor, was met with backlash after he compared the boycott, divestment, sanctions (BDS) movement to the Nazi boycott of Jewish businesses.

“A Yang administration will push back against the BDS movement, which singles out Israel for unfair economic punishment,” Yang wrote in an op-ed for Forward describing his “vision for New York City’s Jewish community.”

BDS is a Palestinian-led movement launched in 2005 and inspired by the South African anti-apartheid movement. The movement calls for boycotts, divestment, and sanctions as a form of non-violent pressure on Israel until its three demands are met: end of Israel’s “occupation and colonization of all Arab lands” and dismantling of the wall separating Israel and the West Bank, full equality of Arab-Palestinian citizens, and the right for Palestinian refugees to return to their homes in Israel.

In his op-ed, Yang described the BDS movement as “rooted in anti-Semitic thought and history, hearkening back to fascist boycotts of Jewish businesses.” He added that “we should be looking for ways to bring back small businesses, not stop commerce.”

But his likening of advocates for Palestinian rights to Nazis and fascists was called out by people as a gross mischaracterization of the movement.

Marc Lamont Hill, host of BET News and media professor at Temple University, tweeted that Yang is “100% right that we must stamp out white nationalism…that we must fight against antisemitic rhetoric and actions. He is 100% WRONG about BDS.”

However, organizations including the Jewish Community Relations Council of New York praised Yang’s statement and voiced their respect for his stance against the BDS movement.

The organization thanked Yang for “his strong positions standing for religious freedom, opposing anti-Semitism, supporting the bond between NYC and Israel.”

The AMCHA Initiative, a nonprofit organization that aims to combat anti-Semitism on college campuses in America, said the BDS movement brands Israel as a racist, apartheid state.

“The Boycott, Divestment, Sanctions (BDS) movement aims to demonize, delegitimize, and destroy the Jewish nature of Israel, with the result of denying to Jews their right of national self-determination,” the AMCHA Initiative said.

But some Jewish people were horrified by Yang’s push back against the BDS movement.

Public Policy Polling reported in December that of New York City-based Democratic primary voters, 17% said they would vote for Yang.