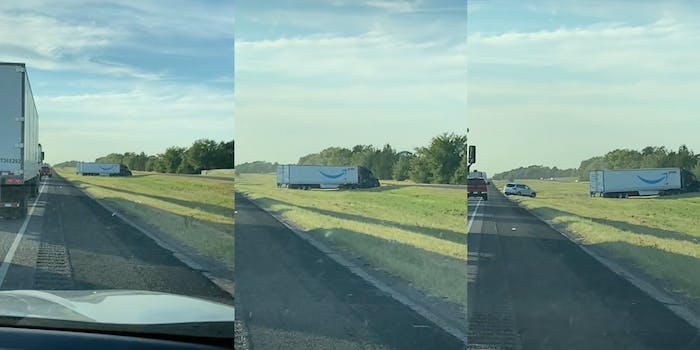 ‘That next day delivery ain’t no joke’: Viral TikTok shows Amazon truck driving off highway to get out of traffic jam (updated)

The video sparked debate over the lengths the driver may have felt they had to go to in order to finish their tasks on time.

Footage of an Amazon delivery truck driver going off a paved road to get out of a traffic jam has reignited yet another round of criticism against the corporation.

@camihardman was stuck in what looks to be bumper-to-bumper traffic on a highway when she noticed one vehicle just wasn’t going to sit there and wait. A semi truck with the familiar Amazon insignia on the side had literally driven off the road and was cutting through a stretch of grass to get to a smaller side road and out of the perpetual traffic.

From the clip, it doesn’t look like a number of vehicles were taking this approach, although one additional car is filmed following the path the Amazon truck cuts through the greenery. This massive truck may have been the pioneer of getting off the road in this particular instance, regardless of the potential danger.

This isn’t the first viral video of an Amazon vehicle driving through potentially unsafe conditions to finish up required deliveries in a timely manner.

In June, a clip featuring an Amazon delivery van carefully making its way down a semi-flooded road in Detroit, despite dozens of vehicles waiting it out on the side of the road, was also posted to TikTok and racked up a number of views and concerned comments.

An Amazon van delivering packages to a neighborhood that had just been ripped apart by a tornado went viral on TikTok in the same month.

All three of the videos use a snippet of Bo Burnham’s “Bezos I,” a tongue-in-cheek ode to the greatness of Amazon founder and former CEO Jeffrey Bezos, often utilized on TikTok to highlight the disconcerting working conditions at Amazon or just mock Bezos for his life choices.

And commenters on the TikTok of the Amazon truck driving off the road were definitely feeling disconcerted after watching the lengths the driver felt they had to go to in order to finish their tasks on time.

“This low key makes me sad cause that truck driver is probably legitimately stressed trying not to get fired,” wrote @mrs.unitedstates.

“That next day delivery ain’t no joke,” @scestx said.

Another user claimed they’ve “seen prime vehicles doing a lot of illegal stuff,” and expressed concern for the drivers.

Several people pointed out that this video was taken in Texas, and suggested that driving off road to get out of traffic is common in the state, so it may not have been anything to be particularly concerned about.

Of course, when it comes to Amazon, its policies, and its treatment of employees, there always seems to be something to be concerned about.

Update 6:49 pm CT Aug. 17: In a statement to the Daily Dot, Amazon spokesperson Branden Baribeau said, “Safety is our top priority, and this does not reflect the high standards we have for our line haul partners who help transport customer packages.”