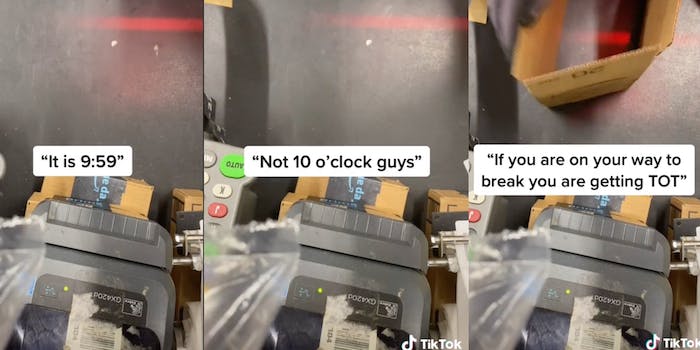 Update 2:25pm CT, July 2: When reached for comment, Amazon spokesperson Maria Boschetti told the Daily Dot that the company “take(s) these matters seriously and are actively investigating the incident. This does not reflect the high standards we have for our management team. “

Original story: Being told not to pack up belongings early might sound familiar to those who attended primary school in the U.S. Apparently, it’s also something Amazon warehouse workers are told.

In the now-viral TikTok video, shared by @amazonassociatef1, an apparent superior at Amazon can be heard telling apparent Amazon workers not to leave their packing stations one minute before their shift ends.

The video is filmed from a bird’s-eye view so that only a worker’s hands can be seen as they box a customer’s purchase up.

“It is 9:59, not 10 o’clock guys,” the supervisor can be heard saying over a microphone or intercom in the video. “If you are on your way to break you are getting TOT as we speak.”

“TOT” stands for “time off task,” something Amazon will deem a break and not compensate employees for.

The video was posted on Monday and has since gone viral, with over 3.7 million views, nearly 550,000 likes, and thousands of comments.

Commenters are pointing out the similarity to what they experienced in the public school system, with one saying: “The bell doesn’t dismiss you I do!”

Others are slamming the apparent treatment of Amazon workers, as seen in the video.

“Literally no point to that other than to remind workers how little control they have and keep them beaten down,” @headt3mpty wrote. “What does it matter if you’re taking a 15 minute break at 9:59 to 10:00? It’s still 15 minutes either way. They just do this to keep them hopeless and submissive.”

The video made its way to the r/PublicFreakout subreddit, with the caption “At Amazon, you better not think about packing up early,” where redditors are cracking jokes about the company’s CEO Jeff Bezos.

“If you take that extra minute Bezos can’t afford the support Yacht for his Superyacht!” u/IllustriousStorm5730 wrote. “”The beatings will continue until morale improves!'”

Amazon has historically received heavy criticism about the alleged treatment of warehouse workers and delivery drivers, from a lack of bathroom breaks to driving in hazardous conditions and 14-hour days.

The Daily Dot has reached out to both @amazonassociatef1 and Amazon.