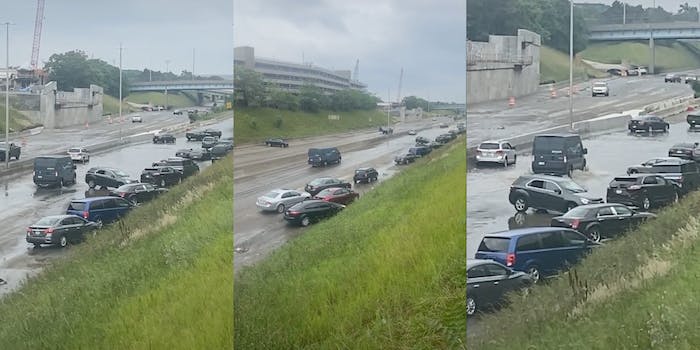 A viral TikTok video of an Amazon driver, presumably out for delivery, on a flooding Detroit frontage road has some folks questioning how far Amazon delivery drivers are expected to go while on the job.

The video, posted by @plantmami5, shows an Amazon delivery vehicle driving through a semi-flooded road while dozens of vehicles are pulled over to the side. It has over four million views and over 800,000 likes on TikTok.

Dozens of Michigan’s highway pump stations in Metro Detroit suffered mechanical issues or were without power Saturday, according to The Detroit News. This contributed to flooding on the region’s freeways and in nearby neighborhoods after the state experienced heavy rainfall on Friday.

The Amazon driver was seemingly unfazed by the water, though. Some viewers found the footage darkly humorous.

While acknowledging the humor of the TikTok and how it was edited—again soundtracked to Bo Burnham’s “Bezos”—other found the reality of the situation sad.

“The sad part for Amazonian drivers is that if they don’t drop off all of their boxes they might as well not come back bc they’ll be fired anyways,” someone said.

Another person commented, “That Amazon driver knows it’s that or get reprimanded. Poor Amazon employees.”

The Daily Dot previously wrote about a similar viral TikTok showing an Amazon delivery driver carrying packages through a neighborhood destroyed by a tornado. Viewers remarked on the salary and working conditions Amazon employees are expected to cope with, saying the driver in the video likely didn’t have a choice.

Amazon did not respond to the Daily Dot’s request for comment by the time of publication, but previously told the Dot, “Delivery Service Partners (DSPs) and their drivers should never make a delivery if they feel unsafe on road.”