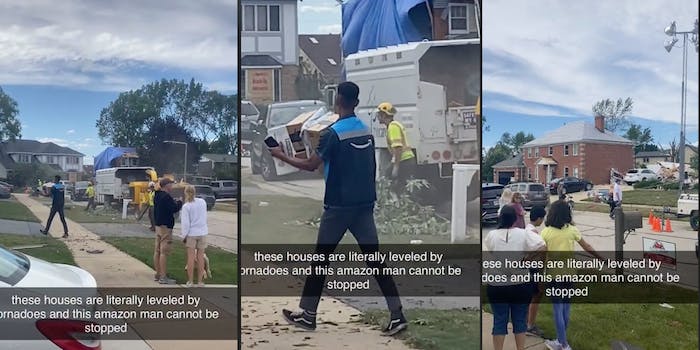 ‘As if he had a choice’: Viral TikTok shows Amazon driver delivering packages in neighborhood destroyed by tornado (updated)

'He does not get paid enough to care.'

The United States Postal Service’s unofficial motto is well-known: “Neither snow nor rain nor heat nor gloom of night stays these couriers from the swift completion of their appointed rounds.”

While Amazon’s delivery service doesn’t appear to have a similar motto, it might include tornadoes if it did.

A viral TikTok video of an Amazon delivery driver fulfilling package deliveries in an Illinois neighborhood ravaged by tornadoes has people questioning how far Amazon drivers are expected to go to deliver packages.

The video shows a tall delivery driver dropping off packages as the residents of a neighborhood survey damage from a tornado, set to the song “Jeffrey Bezos” by Bo Burnham. It has over 400,000 likes and nearly 3 million views on the platform.

A tornado ripped through multiple Chicago suburbs Sunday night, according to NBC. The caption overlay on the TikTok video claims that the houses seen in it were “literally leveled” by the tornadoes. The Amazon driver, however, appears unfazed by the destruction surrounding him as he works to deliver the packages.

Viewers remarked on the salary and working conditions Amazon employees are expected to cope with.

“He does not get paid enough to care,” @Synorei wrote.

“You know Jeff was like, ‘well, is the tornado still happening? No? Then what are you waiting for? Deliver those packages.'” @nachocheeseandanarchy wrote of Bezos.

Others shared their own experiences of receiving deliveries during trying times. “Bro my house burned down for a total loss and my dad died inside 10 days before Christmas and companies were still delivering mail to the driveway,” @yagababa_ wrote.

Previously, the Daily Dot wrote about a similar viral TikTok showing an Amazon Delivery driver skidding on an icy North Texas road during the February winter storm. Viewers were incensed at the company for having delivery drivers work in such dangerous conditions, as well as customers for ordering deliveries during such a dangerous weather event.

Update 12:13pm CT, June 23: When reached for comment, Amazon spokesperson Branden Baribeau told the Daily Dot in a statement that the company’s “Delivery Service Partners (DSPs) and their drivers should never make a delivery if they feel unsafe on road.”

“When it comes to severe weather, we have processes in place to monitor weather events at the local level and adjust route lengths, cancel routes, or even close Delivery Stations and call drivers back off road if necessary,” Baribeau continued. “If any of these were to happen, the drivers receive push notifications via their Amazon Delivery App and via their DSP instructing them on next steps and to return to station, if necessary. Above all, drivers can always return to station if necessary or contact us for additional help via their Delivery App.”