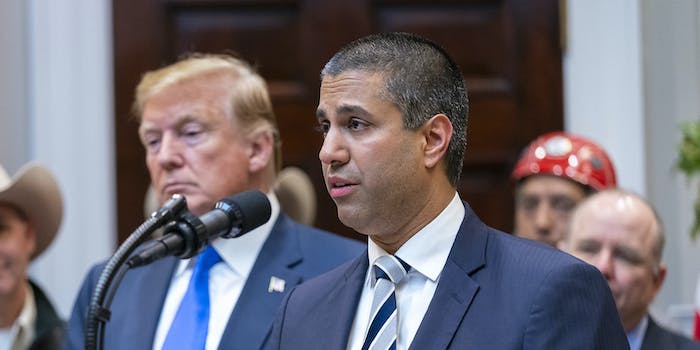 Pai has around two weeks remaining as chairman of the agency.

The announcement is a turnaround for Pai, who just a few months ago said that the FCC would “move forward” on Trump’s executive order, which asked the FCC to “clarify” Section 230, an important internet law that shields websites from being held liable for what is posted by users.

Pai’s decision to move forward was fraught with controversy, as there were open questions about the FCC’s authority to do what the executive order asks of it. Former FCC Commissioner Michael O’Rielly, a Republican, had his re-nomination withdrawn by Trump after he raised those concerns about the order. He was eventually replaced by Nathan Simington, who had a hand in crafting Trump’s order.

Amid all of this, Section 230 has become a political flashpoint, with lawmakers on both sides of the aisle seeking to meddle with it, while tech advocates and experts have warned that a repeal would have disastrous consequences online.

While future actions by lawmakers are still a looming threat as President-elect Joe Biden gets set to take office, it looks like the law won’t be tampered with by the FCC under Pai, who announced he will step down from the chairmanship on Inauguration Day.

Pai has under two weeks remaining as chairman of the agency.

“The status is that I do not intend to move forward with the notice of proposed rulemaking at the FCC,” Pai told Protocol as part of an interview that will air on C-SPAN over the weekend. “The reason is, in part, because given the results of the election, there’s simply not sufficient time to complete the administrative steps necessary in order to resolve the rulemaking. Given that reality, I do not believe it’s appropriate to move forward.”

When asked what he thought “should be done” about Section 230, Pai added that he believed Congress “will have to study and deliberate on very seriously” about changes to the law. He also noted that Biden has echoed Trump in pushing for a repeal of the law.

Members of Biden’s administration have also spoken out against Section 230. That, coupled with the push from numerous lawmakers in Congress, makes it all but certain the law will continue to be a target over the next few years.