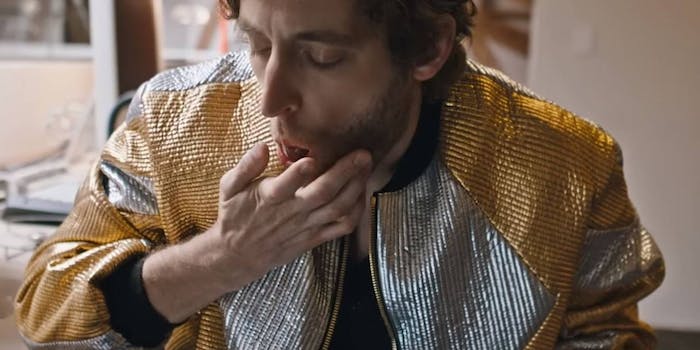 This terribly depressing sci-fi short was created by artificial intelligence

This is an absolute riot. And deeply disturbing at the same time.

This AI-created short is proof that original sci-fi films still exist, assuming you are okay with something as comprehensible as Terrence Malick’s works.

Sunspring, a short film that debuted on Ars Technica, was written entirely by an artificially intelligent system named Benjamin. It looks and feels like a sci-fi thriller, but makes absolutely no sense. The dialogue is so incomprehensible that, when paired with the film’s delightfully talented and dedicated actors, provides more comedy than plot. But hidden behind the laughter is a deeply disturbing thriller with images of suicide, the coughing up of body parts, and loss.

The seven-minute film has three characters: H, Thomas Middleditch (Silicon Valley); H2, Elisabeth Gray (The Voorman Problem); and C, Humphrey Ker (sketch-comedy group The Penny Dreadfuls). A simple plot, and the first line of the short, was predefined for Benjamin to use in creating the rest of the screenplay.

“In a future with mass unemployment, young people are forced to sell blood.”

Benjamin’s creator, Ross Goodwin, a PhD candidate at New York University, taught the neural network how to create its own crude sentences by inputting the dialogue from a number of popular sci-fi films including Star Trek, Tron, and Super-8. The computer then took those scripts, used their words and the way in which the sentences are constructed, to create an original screenplay.

Still, the AI system doesn’t actually know what those words mean, so even though the sentences are mostly structurally sound, they don’t end up very coherent. Still, the computer is capable of coming up with some stunning imagery just abstract enough to let your imagination run with it.

“It’s a damn thing scared to say. Nothing is going to be a thing, but I am the one who got on this rock with a child. Then I left the other two.”

But what is perhaps most shocking about the film is how disturbing some of its sequences are. At one point, Middleditch randomly stars coughing up a human eye. Later in the film, he takes a shotgun and puts it in his mouth. It even sounds like there are references to loss, sex, and betrayal.

For now, we can laugh at this short’s resemblance to the always-funny humor in these bad lip reading videos. But after watching Sunspring it seems that AI might have something much deeper to say, something much more uncomfortable.