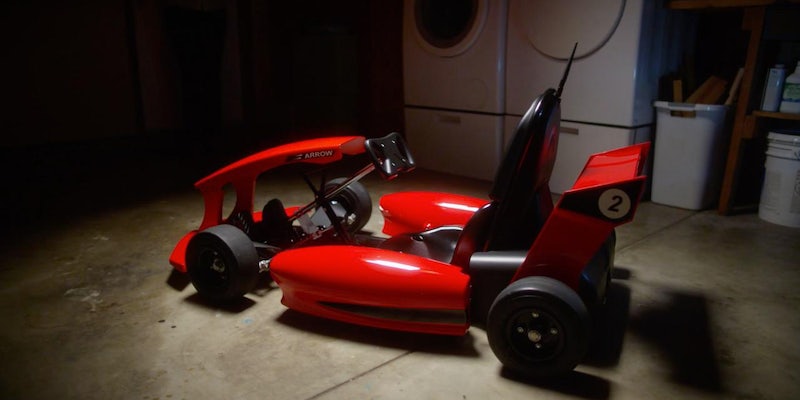 The Arrow smart go-kart is like a Tesla for kids

It'll make you wish you were a kid again.

If the only wheels you got as a kid were on your bike or roller blades, prepare to be jealous. Kids today can ride in style behind the wheel of a smart, electric go-kart.

The Arrow from Actev Motors is like the Tesla of the pre-teen world. Designed for children ages 5 and up, the electric ride gives kids a taste of the open road.

With two independent, 250-watt electric motors powering the vehicle, drivers will be able to race at up to 12 miles per hour. A single charge of the lithium-ion battery is good for up to 45 minutes of drive time. Pneumatic rubber tires keep the kart gripped tight to the road, while built-in proximity sensors detect obstacles and automatically avoid collisions—a perfect feature for the kid that decides to get a head start on the regrettable practice of texting and driving.

While kids control the vehicle, parents can exercise additional restrictions through a connected smartphone app. The maximum speed of the device can be adjusted on the fly, so parents can cap their kids at a rate they’re comfortable with.

Wi-Fi and GPS in the kart broadcast its location at all times. If it’s not enough to just monitor movement, parents can also set up a geofenced border that will prevent the vehicle from traveling outside the designated area.

The Arrow isn’t cheap, especially compared to competition like Power Wheels. Priced at $599 to start, Actev Motors is banking on parents seeing the benefit of additional controls and safety features that cost more up front but might save a hospital bill down the road.

No matter the cost, the Arrow is definitely a smarter—and much safer—choice than a hoverboard.