Was the White House’s typo-ridden ’78 terrorist attacks’ list a trick on the media?

The White House on Monday night released a list of 78 “terrorist attacks” that it said were “underreported” by the media amid an ongoing legal battle over immigration that hinges on fears of terrorism—and the media took the bait.

The timing of the list’s release—and even its inaccuracies and a slew of typos—point to a White House manipulating the media into reminding Americans just how frequent a threat terrorist attacks are. This, just as the Trump administration heads to federal court to have a restraining order lifted on its controversial travel ban, which it imposed under the auspices of preventing terrorism.

“In many cases, the very, very dishonest press doesn’t want to report it,” Trump said of terrorist attacks on Monday. “They have their reasons, and you understand that.”

Incensed at the lie, the media was hooked.

Only 37 of the “terrorist attacks” listed on the White House document were cases in which innocent people were killed, which you can find out with a rudimentary page search. The White House’s list also includes multiple errors in reporting and basic spelling errors, as other outlets have breathlessly pointed out.

The White House’s list includes several “knife attacks” by ISIS that resulted in no casualties and where the terrorist was promptly killed, such as in the September 2014 case in Melbourne, Australia.

The report also fails to mention incidents in which those killed were Muslim.

The “terrorist attacks” on the list included failed plots where the federal government has yet to formally approve the attackers’ ties to ISIS, such as in June 2015, where Boston police alleged that Usaamah Rahim and David Wright planned to attack both Boston police and cartoonist Pamela Geller, known for her controversial “draw Prophet Muhammad” contests. The incident ended with Rahim dead and Wright in police custody. Wright, along with co-conspirator Nicholas Alexander Rovinski, were indicted on conspiracy charges last year but are still awaiting trial.

The White House list also misspells “attacker” as “attaker” on 27 different occasions and misspells the city of San Bernardino, California, as some media outlets soon pointed out.

It goes without mentioning that virtually every single incident on the list of domestic and overseas terrorist attacks received coverage by the press, in some cases in multiple countries. The list includes attacks like the Orlando night club mass shooting and the San Bernardino mass shooting, which many outlets have already noted both dominated weeks of print and broadcast media coverage around the world.

The White House released the list to the media on Monday evening in response to a back-and-forth between Trump, Spicer, and the media you can read about extensively in USA Today, Politico, the Guardian, and, well, practically any news source. A simple search of Google News on Tuesday morning for “78 terrorist attacks” reveals that the world’s major news organizations are busy at work debunking Trump’s claim. 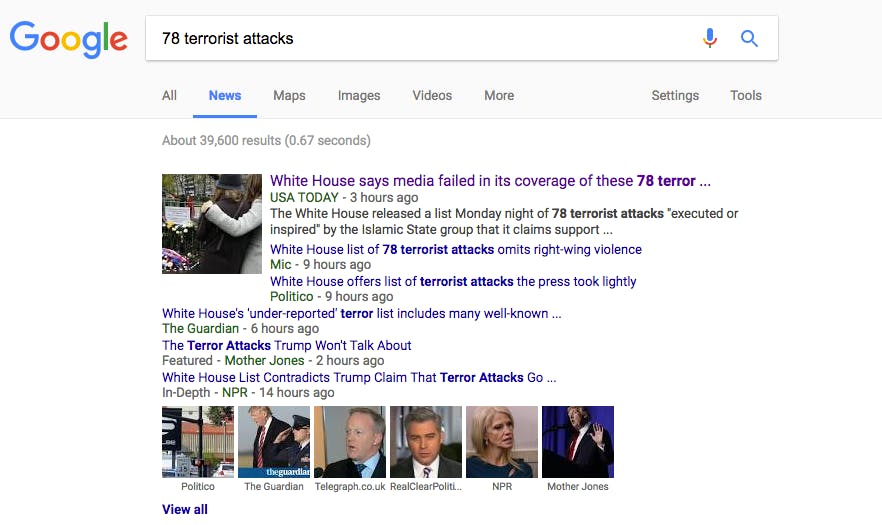 Are Trump and Spicer correct in that the Western media is ignoring ISIS? The answer appears to be a resounding no. According to New York Times reporter Rukmini Callimachi, who on Saturday published a months-long investigation into the terrorist organization that spanned multiple countries:

None of this is to say there aren’t problems in reporting on ISIS. The Columbia Journalism Review does note that much of the media has forgotten previous mistakes by the Western press in its coverage of the Iraq War. The wealth of anonymous sources and lack of underground reporting on ISIS further increases the possibility of errors.

“A fog of information contributes to the problem. ISIS’s campaign of violence has made it all but impossible for American journalists to report on the ground in Iraq and Syria. And even though there are plenty of voices that are critical of the recent ISIS narrative, those voices aren’t reaching the majority of Americans, who get their news through national cable TV, and whose awareness of news sources is split along partisan lines. “

A prime consumer of said national cable TV reporting? None other than Trump himself.