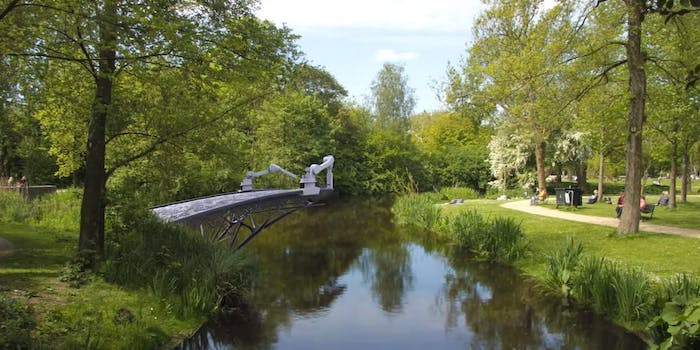 In Amsterdam, a 3D printed bridge will be built in mid-air

The bridge that builds itself.

In America, our infrastructure—roads, electrical grids, and especially bridges—are desperate need of repair and upgrade. In Amsterdam, a solution might exist in the form of a bridge that basically builds itself.

The unique construction project is set to take place in two years. The two month project will task a robot with 3D printing a bridge in mid-air.

Joris Laarman, project lead and head of research and development firm MX3D, has been pushing the boundaries of 3D printing with his six-axis bots. Instead of building parts in a lab to be put together, his team has developed a method of essentially drawing things into reality.

The metal-printing bot will literally be building the structure of the bridge as it goes, creating the rail support and foundation as it slowly moves forward. As the bridge is built, the bot will continue to advance across the canal until it successfully reaches completion on the other side.

Laarman has already successfully applied these methods on a smaller scale, creating metal sculptures and other studio-bound projects.

The bridge will mark the first test of MX3D’s technology out in the wild. Challenges including weather and terrain will have to be accounted for. The firm has recruited help from engineering software company Autodesk to create error control protocols for the bot in order to ensure it will be equipped to handle any issue that may present itself during the build.

More exciting than the project itself—which is pretty darn exciting—is what it could represent. The possibility of building entire structures with 3D printing could open up a world of possibility when it comes to construction. It could also turn typical labor-intensive jobs into automated services, which is likely less thrilling for people currently responsible for building those structures.