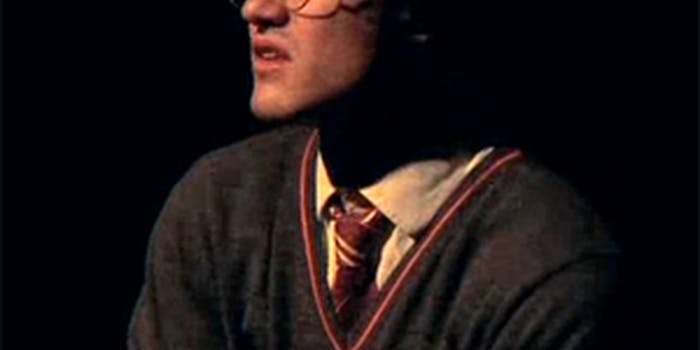 A Very Potter Musical heads back to Hogwarts

The creators of the wildly popular stage show and YouTube phenomenon have announced they'll stage a third installment.

Before he landed a starring role on Glee, Darren Criss became famous to millions of online fans by playing Harry Potter in the 2009 YouTube phenomenon for which he wrote music and lyrics, A Very Potter Musical—or, as it’s known in Harry Potter fandom, AVPM.  Now, three years later, he’s teaming up with the original gang, production company StarKid, at LeakyCon to do it again.

This weekend at Ascendio, a Harry Potter convention in Orlando, co-creators Matt and Nick Lang hedged that the long-hoped-for third musical, generally referred to as AVP3 or AVPT, wouldn’t be staged anytime soon, citing the costs of producing an elaborate musical such as AVPM and putting it on for free. They did suggest that perhaps in the future they would stage a reading.

Apparently, the future is now. Just two days later, LeakyCon, the popular HP con offshoot of HP news site The Leaky Cauldron, surprised everyone with an announcement on its website that not only were they doing a staged reading of the production, officially titled AVP3D: A Very Potter Senior Year, but that Criss and all of the original cast would be returning.  “Now I can give you a straight answer,” cast member Joey Richter tweeted. “It’s happening.”  Mere minutes after the announcement, #AVPSY was trending worldwide on Twitter.

A Very Potter Senior Year is the third musical in the series, but fans planning to travel to LeakyCon just to see the show should take heed: A “staged reading” means no sets, no dance numbers, and few costumes. Not that fans of the show seemed to mind: On Twitter last night and this morning, the mood was one of joy, mixed with fears that the show would be staged, as LeakyCon’s site indicated, “one time only,” meaning no YouTube video to follow for fans who can’t make it to Chicago. Still, the con website noted it would have a live feed, leading fans to hope for wider distribution.

The popularity of AVPM and its 2010 sequel, A Very Potter Sequel, coincided with the rise of Wizard Rock (or Wrock), another Harry Potter fandom phenomenon that led to thriving careers (or at least thriving weekend gigs) for a number of musicians and performers who found that they could develop a greater fan following doing songs about Harry Potter than they could writing original work.

This concept has not only fueled an entirely new wave of Harry Potter fandom activity, but has led to serious careers: Bands like Harry and the Potters, Remus and the Lupins, and the Whomping Willows have developed large cult followings, while A Very Potter Musical propelled Criss into a major career and turned a bunch of theatre kids from the University of Michigan into a real performing company known affectionately around the fandom as Team StarKid.

“We’re treating it as something of a reunion,” wrote Helden on the LeakyCon website, “and with the help of LeakyCon we’ll be including nearly every StarKid actor we’ve ever worked with. We may even ask for fan contributions to the reading, making this a true celebration of everything that’s happened over the last three years.”