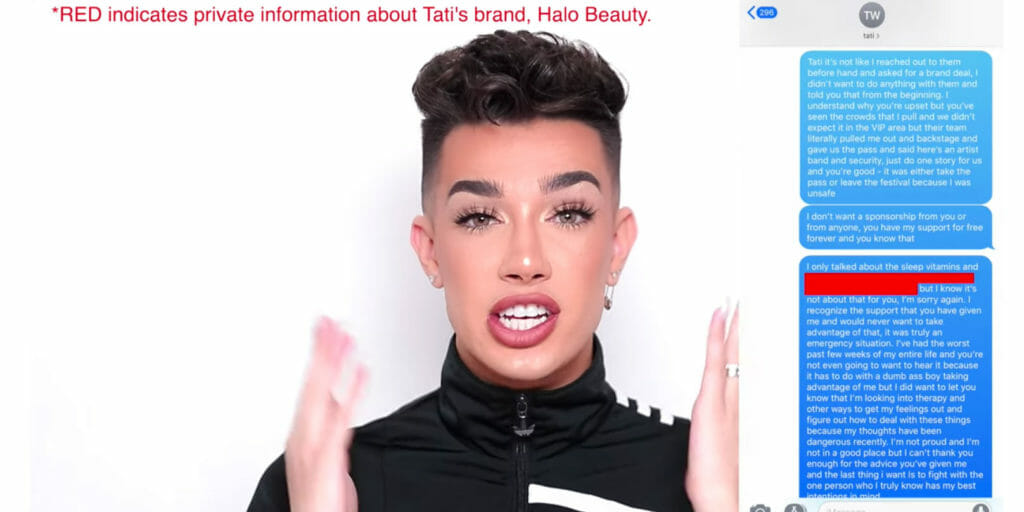 Wrapping up what he describes has been one of the “darkest” weeks of his life, James Charles has released a video in response to the saga that unraveled with Tati Westbrook after she accused him of abandoning him for promoting a rival brand and sexually harassing men.

“I will not ask for sympathy, and I will definitely not ask for forgiveness,” the beauty vlogger says in the video, adding that even though he agrees with Westbrook’s latest video where she reportedly said she hoped all parties involved could move on, he still felt the accusations were unfounded and needed to clear his side of the story.

He explained that he accepted an offer to promote Sugar Bear Hair’s product after the company saved him from a “mob” of fans at Coachella, where Charles and his friends had a “VIP pass” instead of an “artist pass.” The latter, he explained, is not accessible to the public without invites, but because he decided to attend it last-minute, he couldn’t secure an artist pass.

He said he was not “safe” when he attended the second week because of all the public attention and asked another artist if Sugar Bear Hair could help him get in with an artist pass. Brand representatives apparently saved him from the situation, and in turn, Charles agreed to a contract to promote their product.

He showed screenshots of chats with Westbrook where he did give her a heads-up about the content before it was posted online, even though Westbrook’s video snippets say she had no prior knowledge until it was posted. He also said he tried to contact Westbrook and her husband repeatedly, which went unanswered until he decided to give them space and wait for it to blow over.

Instead, with Westbrook apparently crying in her Instagram stories about feeling let down by Charles’ action, the whole thing blew up. Charles lost more than a million followers in the aftermath. He faced further backlash owing to accusations in Westbrook’s video of sexually harassing a straight man. (His flirtatious texts and DMs with other YouTubers have surfaced recently too.)

In his video, posted on Saturday, he responded to these allegations as well, with snippets of a video from the man involved who said he didn’t feel harassed or unsafe in the alleged situation. He said their interaction was consensual.

He also shared screenshots of their inside jokes, where they made referenced each other as “famous” in response to Westbrook’s claims that he tried to use his celebrity status to take advantage of the man. Charles says Westbrook herself has participated in these “famous” inside jokes.

Westbrook responded to Charles’ message on Saturday afternoon. She said Charles’ video was full of “lies” and “half-truths” and stands by her original video.

I've left town on a digital break to heal & pray for healing on all sides. My family made me aware of what was just posted & I'm disappointed to see it littered with so many lies & half truths. I stand by my videos – do not twist my words into what they are not, hear the message.

The intense saga has been followed by fans (and non-fans) this whole week, and inspired some funny memes:

Tati : Im about to end this mans career

Jeffree Star and the beauty community before he releases his receipts on James Charles pic.twitter.com/WdCKkeV33z

And some used the hype to draw attention to larger social issues like climate change and reproductive rights.

OMG JAMES CHARLES, TATI AND JEFFREE REALLY JUST now that i have your attention, the planet is DYING and woman are being STRIPPED of their rights as we speak. let’s put our energy into our women and saving our fucking planet.

I keep seeing the names “James Charles” and “Tati Westbrook” and I don’t know if these are Game of Thrones characters or candidates running for president, but I do know that we all should be donating to the ACLU and Planned Parenthood.

If Charles was worried about losing his followers, his video is clearly serving its purpose: It reached more than 21 million views within 24 hours.