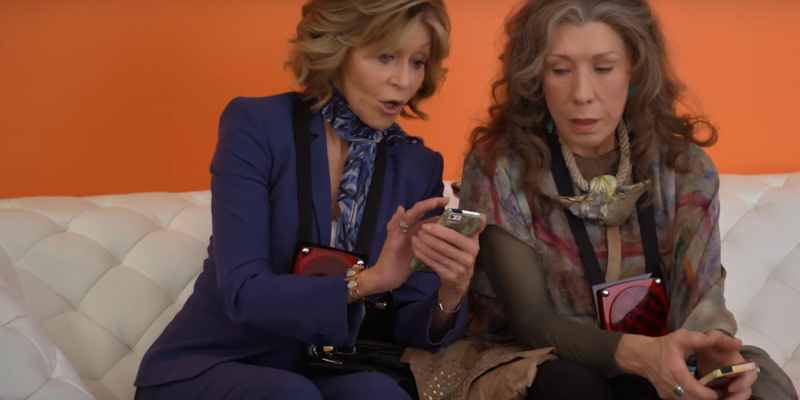 Grace and Frankie, now in its third season, is proof positive that getting older doesn’t have to be joyless.

Here ex-wives Grace (Jane Fonda) and Frankie (Lily Tomlin) hit the reset button on life when their two husbands, Robert (Martin Sheen) and Sol (Sam Waterston) reveal they’ve been having an affair for 20 years. The Netflix show, which returned on Friday, embraces the idea that even at 70 years old, you can still find new ways to reinvent yourself.

As a binge-worthy series, Grace & Frankie ages gracefully. The first season was all about our two leads dealing with their ex-husband’s searing betrayal. The second season was all about Grace and Frankie, and their exes, dealing with the fallout—and what that means for their lives. The third season is an earned progression that finally gives Grace and Frankie a way to carve out a new identity: They go into business together.

Naturally that comes with ups and downs. After Frankie’s business venture to create a homemade lube with Grace’s daughter, Brianna (June Diane Raphael), reaches a crossroads, the two budding entrepreneurs come up with a new business idea that vibrates with ingenuity. (They decide to manufacture a vibrator for the older woman.) Of course no ingenious idea is not without complication. They get rejected by multiple banks for a loan, and Brianna offers to make amends by giving them a loan to get their self-pleasure business off the ground. The only catch is that Brianna doesn’t want her mother to know, so Frankie agrees to keep the loan a secret by saying that it came from Jacob (Ernie Hudson), Frankie’s new beau.

If you think that will cause problems down the line, you guessed correctly. Grace and Frankie, created and produced by Friends mastermind Marta Kauffman and Howard J. Morris, is full of conventional sitcom tropes. Characters lie to each other even though telling the truth would make things so much easier, just because it will create drama down the road. Where the show succeeds is not in avoiding those familiar tropes, but how it handles them. An episode where Grace lies about having a gun—something Frankie absolutely cannot stand—could’ve become fodder for typical comedic relief. Instead it’s a way for the writers to further dive into the dynamic between these two friends. It explores how something so profoundly simple, like a disagreement over a firearm, can show just how different yet ultimately similar the two are. The crux is not the differences, but how they handle them.

The series soars as a show that deals with the intricacies of friendship, family, and what it means to accept someone. While the first season had a bit of a sluggish start, the second season picked things up considerably. In the show’s third season, the story takes a darker and more serious turn. Their new business partnership provides many laughs, but it also pokes at the cracks of their friendship. In a similar fashion, Robert and Sol’s relationship gets further examination. If the first two seasons were Robert and Sol coming to terms with being a couple, season 3 explores what it means to be gay at 70.

When Robert gets cast in a musical reproduction of 1776, he and Sol must contend with angry protesters furious that a theater company employs homosexuals. While Robert wishes to ignore them, Sol simply cannot just “leave them be” and confronts them during rehearsal, accidentally splashing a protester’s child. This creates tension between Robert and Sol, and smartly probes at what being gay means for those who spent a lifetime suppressing their identity. Coming out is a complicated process, whether you read Teen Vogue or AARP. Robert wants to coexist in peace and quiet, but Sol wants Robert to loudly embrace a life the two of them have only begun to understand.

The show also explores the lives of our leads as children. For a series that technically has eight main characters, everyone is given an arc and a story this season. From Coyote’s (Ethan Embry) struggle to find his biological mother, to Bud’s (Baron Vaughn) complex relationship with his girlfriend, Grace & Frankie gives equal screentime to everyone. Even a character as seemingly superficial as Brianna is given extra nuances as she falls for an employee at work. When her lover wants to take the relationship to the next level, Brianna is unsure if she’s ready for the one thing she’s seemingly wanted all along. The show indiscriminately unravels the complexities of relationships and proves that when it comes to love and heartbreak, age is really just a number.

Of course with love and heartbreak comes the sad inevitability of time. Grace & Frankie doesn’t shy away from not only the complexities of relationships, but of getting older as well. There’s an entire episode where Grace and Frankie injure themselves and spend a day literally on the floor. In a lesser show, such an aside would be full of slapstick humor and puns that rhyme with “pitfalls.” With Grace & Frankie, the writers carefully explore the psychological effects of aging. As the season comes to a close, Frankie must make a very big decision involving Jacob and Grace. For anyone having to re-think life priorities and desires as getting older makes simple tasks much more complicated, Frankie’s struggle can’t help but feel tangibly real.

If you start to wonder if Grace & Frankie is a straight-laced drama, the show quickly reminds you of its sitcom roots. While the ending may feel sugary, it shows clear affection for its two heroes. While their journey gets difficult and morose, Grace & Frankie always reminds you that aging with dignity and style is a piece of cake.