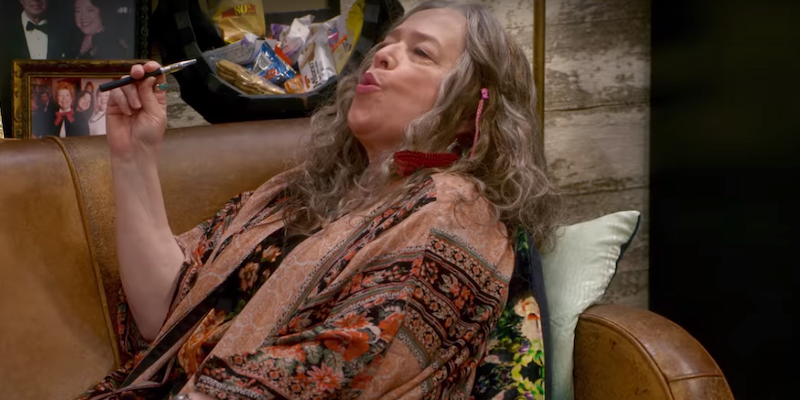 Netflix’s ‘Disjointed’ is offensive to stoners

Kathy Bates shines in this clunky sitcom about legal weed.

With a clearinghouse of content available to stream, Netflix’s lack of a programming identity has bled into its originals at an alarming rate. Nowhere is this more apparent than in the new comedy, Disjointed.

Set in the world of medical marijuana, Disjointed takes a look at the pot industry in Los Angeles on the eve of recreational legalization. At Ruth’s Alternative Caring, cannabis lawyer, activist, and all-around enthusiast Ruth Whitefeather Feldman (Kathy Bates) is at a crossroads. She can either try to expand her business, as her son Travis (Aaron Moten) keeps urging her to, or she can stick to her roots, preaching the “healping” (healing and helping, as Ruth calls it) powers of weed.

Most of this is just setup for a bunch of lazy pot jokes, of course. The pilot episode leans so heavily into stoner humor, it feels like a collage of jokes pieced together from better scripts (Half Baked, Pineapple Express, Harold and Kumar, Dude Where’s My Car, pretty much anything involving marijuana.)

It makes sense for this show to exist. It makes sense for it to be on Netflix too, or at least on a premium cable network. Although widespread legalization may now seem inevitable, pot is still a pretty big taboo for many in this country (just ask Attorney General Jeff Sessions), making this show a tough sell for major networks. Which is why it’s strange that Disjointed plays like a something that should be on CBS.

The main explanation for this is the hand of executive producer/creator Chuck Lorre, who is a mini-sitcom factory unto himself. The man behind hits like Two and a Half Men, Mike & Molly, The Big Bang Theory, Mom, and more, Lorre is perennially busy. Not only does he have Disjointed coming out this year, but Big Bang Theory spinoff Young Sheldon will be premiering on his home network, CBS, this fall.

That’s not to say that Lorre isn’t very hard-working or good at what he does. If his career is a testament to anything, it’s that both those things can be true and you can be extremely successful and accomplished without creating anything that’s particularly compelling or hip. Perhaps it’s this lack of hipness that in part makes Disjointed such a slog. One gets the sense watching it that Lorre has never smoked pot. (Maybe Charlie Sheen was right after all to rail at him over his healthy habits.) And without a sense of what marijuana is all about, the feelings it produces, or its complexities, the show ends up relying on other narrative devices to fill in the gaps.

Musical numbers, crazy transitions, fake commercials, and animated sequences are all used here, but because the show is so firmly rooted in typical sitcom tropes, there’s a disconnect. None of the stylistic flourishes Disjointed employs can distract from the fact that what you’re watching is essentially a run-of-the-mill sitcom with more drugs and cursing. Lorre and Javerbaum seem to want to distance the show from your typical multi-cam comedy. The runtime is longer, the credit sequence is sometimes played with, and Lorre even skips his signature vanity cards at the end. Yet all this serves to do is highlight how strange it feels to be watching this show on Netflix.

Not that Netflix shouldn’t have traditional sitcoms. The Ranch and Fuller House also come with a laugh track, and like Disjointed, a longer episode order. Sitcoms are cheap to make, and people still like them, so it makes sense that Netflix would want to get in on the action. It’s just, does it have to be with these sitcoms? Does making a sitcom mean you have to make a stereotypically bad sitcom? A note to the executives at Netflix, NBC recently canceled The Carmichael Show—an excellent sitcom that’s just waiting to be picked up by a worthy home.

Some things about Disjointed work. Bates is definitely having fun as the hippyish Ruth, though it’s a role she could play in her sleep. When the show goes beyond pot humor, it gets out the occasional good joke, as long as you don’t mind some stereotypical Asian humor and cynical zingers like, “You millennials, you’re always asking for validation. Everybody gets a quidditch trophy!” The show should get points for weaving a stronger narrative throughout its first season than most Lorre series do, although it only succeeds at this in small doses and you can almost feel the Netflix pressure to keep people binging. One subplot involving the dispensary security guard, Carl (Tone Bell), a former soldier who learns to cope with PTSD through pot, is surprisingly ambitious, though similar subject matter was handled better on FXX’s You’re the Worst.

Like Netflix itself these days, Disjointed doesn’t know what it wants to be. Just as Ruth is struggling to stay cool and anti-establishment under an increasingly corporate structure, Disjointed is straining to be edgy and timely under the guise of humor that is tired and old. It may not be the worst Netflix show ever, but it’s perhaps its most confusing blunder so far.