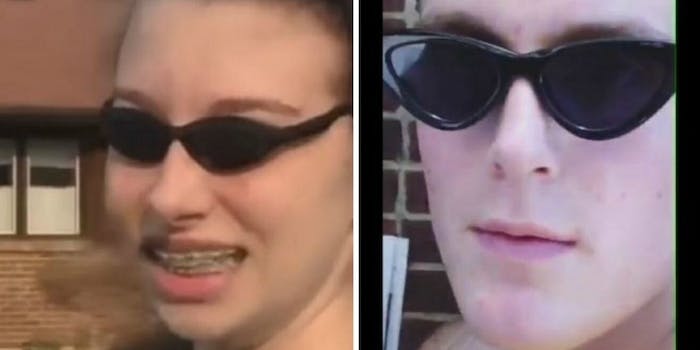 The creator of the ‘Who is she?’ vine says Jake Paul ripped her off

Chloe Woodard, best known as the creator of one of the most famous memes in internet history, has accused YouTube star Jake Paul of copying her content. And she is not happy about it.

Woodard created the “Who is she?” vine that features her facing away from the camera and bopping her head to a-ha’s “Take on Me” before she wheels around and grins a smile full of awkwardness (and braces).

This week, Paul posted something similar with a tweet imploring Vine not to die.

And yes, it’s nearly the same.

Hey Jake! That's my vine! I would say "in the future, tag me!" but there is no future, stop using my content, and do not associate with me in any way thanks :) https://t.co/1eGI6f3HVS

She was then apparently thrashed in her mentions by Paul’s fans. As Woodard wrote on Twitter, “for the record i dont need anyone elses ‘clout’ i already earned my own . if people r following me thats their choice and it’s prob because im super cool, funny, and cute! :~P Anyway…

“my twitter keeps freezing cause all 9 jake paulers are in my mentions can you guys please go back to whatever it is 12 year olds do these days im trying to absorb the queer energy on my timeline and yall are making it difficult.”

She also had a response to Paul’s middle finger salute.

I would try to recreate one of your iconic moments as a response but unfortunately they're all disgraceful events in which you were publicly shamed. So thanks for the @ king! https://t.co/AYIuXajQsy

Though Paul is currently in the middle of what seems to be a successful Team 10 tour, he can’t avoid controversy. Nor is he trying to do so. His YouTube team has been decimated after the departure of former COO Nick Crompton and one of his best friends, Chance Sutton, as Jake Paul’s dad is apparently trying to consolidate power between the businesses run by Jake Paul and brother Logan Paul.

Paul was also busted this week for causing chaos at a North Carolina amusement park.

Paul probably wasn’t explicitly trying to rip off Woodard’s iconic vine. It’s much too well-known for him to think he could do that without the entire internet world noticing. He was probably just trying to make an easy joke in a familiar way. But because he responded the way he did—with his middle finger flipped—that will just lead to more derision for him. And he’ll have earned it.