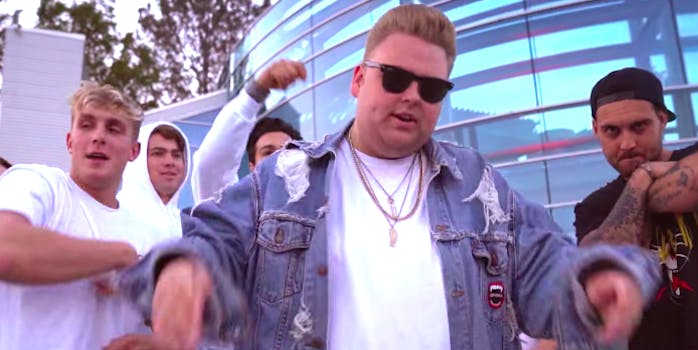 He spared some nice words for Paul, though.

Nick Crompton announced on Friday night that he has resigned as chief operations officer of Team 10, the social media collective home to ex-Disney-Channel-star-turned-YouTuber Jake Paul.

Folks who are unfamiliar with the social media squad may recognize Crompton from the video for Paul’s “rap” song, “It’s Everyday Bro.” The video has earned nearly 193 million views since dropping last May, and Crompton’s verse quickly gained notoriety for one geographically confused bar: “England is my city.”

The line, which Paul admittedly penned, instantly became a meme, as did Crompton himself. Sadly for the savage, Paul-loathing meme community, Crompton won’t be providing any more easy punchlines as a member of Team 10. He tweeted an extensive statement detailing his departure on Friday night:

It's time to move on from Team 10. pic.twitter.com/8CrDcOTzmH

“Due to internal changes being made within our various businesses that I don’t agree with, I have resigned both as Chief Operations Officer and as talent,” Crompton wrote. “I still love my Team 10 family but the vision for the business, people involved and direction it’s now going in, no longer makes sense to me.”

Crompton also had some kind words for his former associate, Paul:

“I also want to take this opportunity to thank Jake and ask the world to lay off him a little bit. He is one of the most kind hearted and generous people I know. There’s a whole side of him that the public rarely gets to see. I try to keep my distance from ‘drama’ which is why I almost never comment on it but I would like to say that 99 percent of what you read about him is hilariously untrue.”

Crompton ended his letter by saying he has “new projects in the pipeline if any investors are interested” and is “also open to any other interesting opportunities.”

Team 10 fired back on Twitter on Saturday afternoon with its own statement. It contains exactly the type of vague and petty language you’d expect from a “social media squad.”

Read an excerpt below:

Team 10 will never allow one individual to negatively influence or undermine the team’s collective vision, but if it begins to happen in any capacity, the situation will immediately be corrected to protect the community we’ve all worked so hard to build and protect.

While it is always painful to say goodbye to individuals that have been part of our family, the reality is that Team 10 departures are always the result of a larger team decision and a deliberate plan to return balance and loyalty to our family.

When members of an organization are focused on themselves and not the greater good of the team, there will undoubtedly be a disconnect. When our team reaches an impasse like that with individuals who no longer support the team vision, they must be removed so Team 10 can continue to thrive, support the fans, and foster the loyalty that keeps our community so powerful.

There seems to be a discrepancy between both parties as to whether Crompton resigned or was fired from Team 10. Regardless of the truth, this beef seems fresh, bro.