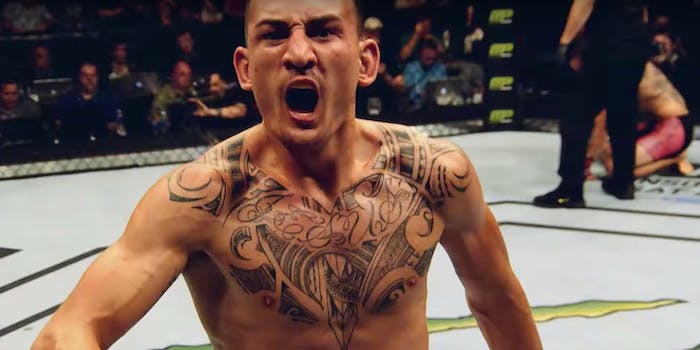 Max Holloway is looking for redemption.

There’s a brand new way to live stream UFC 236, and it comes with a deal that’s quite possibly too good to pass up.

Thanks to a new seven-year deal, UFC pay-per-views will stream exclusively on ESPN+, the network’s new subscription service, while the preliminary bouts will air on ESPN and the undercard, as always, will be available on UFC Fight Pass.

You certainly won’t want to miss this one. Dustin Poirier made Max Holloway submit in his UFC debut in 2012, but since then, Holloway has lit UFC on fire. The Hawaiian featherweight champion is one of the most popular fighters in the world—especially online—and he’s moving up in weight for this chance at redemption. For Poirier, it’s his first title shot and a chance to catch lightning in a bottle twice.

Here’s everything you need to know to watch UFC 236 online.

UFC 236: How to watch Max Holloway vs. Dustin Poirier 2

ESPN+ is now the exclusive host of UFC PPVs online. That means you won’t be able to watch UFC on Amazon Prime or anywhere else. You have two options for ordering UFC 236 with ESPN+.

Only the UFC 236 Main Event will be featured on ESPN+:

What is ESPN+ and how does it work?

When it comes to live sports, ESPN+ is nearly as essential as ESPN itself. The subscription service functions as an extension of ESPN’s site and app on devices like Amazon Fire Stick, Roku, and iOS and Android devices (full list above). The ESPN+ content is marked with a golden “E+,” and the only way you can unlock those offerings is with an ESPN+ subscription.

ESPN+ hosts 20 exclusive UFC Fight Night events per year, every single out-of-market MLS game, 180 NHL games, at least one MLB game every day for the entire season, and more college sports than you’ll know what to do with.

You’ll also be able to watch the entire 30 for 30 catalog—all 150-plus entries and counting—read exclusive articles, and you’ll experience fewer ads across the ESPN network. No matter what sport or team you follow, you’ll find something to love about ESPN+.

Other ways to watch a UFC 236 live stream:

You can also find a bar offering a UFC 236 live stream here.

The UFC 236 preliminary bouts will air on ESPN, starting at 8pm ET:

You can learn more about watching ESPN online here, but to save you some time, you’ll find all of the essential info below.

UFC Fight Pass is a monthly subscription service that regularly hosts these sorts of undercard bouts and offers a bunch of behind-the-scenes material. But, to be clear, you can’t use it to watch the PPV portion of UFC 236, only these preliminary bouts. UFC Fight Pass works with Apple TV, Xbox One, Xbox 360, Amazon Fire TV, Chromecast, Roku, Samsung Smart TVs, LG Smart TVs, and iOS and Android devices.