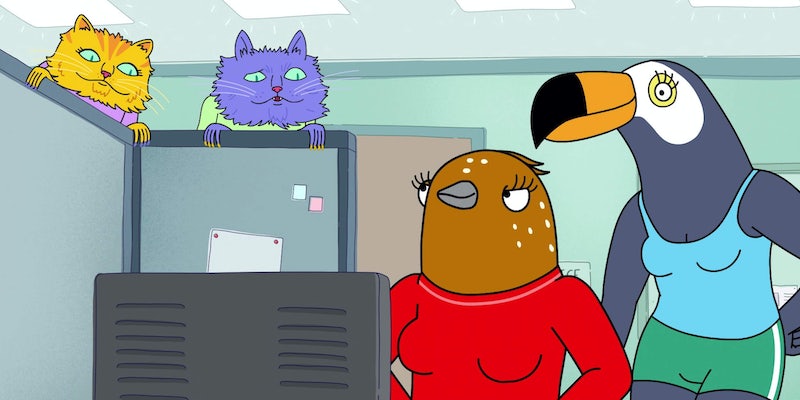 The revival comes nearly a year after the show's cancellation.

The series, which stars Tiffany Haddish and Ali Wong as the titular birds, will premiere some time in 2021 with an option for Adult Swim to order additional seasons. Haddish, Wong, and co-star Steven Yeun are all set to return.

“I’ve been a fan of Adult Swim shows since my teens, so I’m thrilled to bring my beloved fowl to the party and be a new voice for a fresh decade of absurd, irreverent, yet heartwarming adult animation,” Hanawalt said in a statement.

The Adult Swim revival comes nearly a year after Netflix’s shocking cancellation of the series last July. At the time, it was one of several shows that got the ax after a short life on the streaming service and garnered complaints about Netflix’s algorithm, its reputation for being an inclusive platform (many of the shows canceled were created by women and people of color), and how much it actually promoted the series.

It’s the rare example of a more traditional network rescuing a streaming title from cancellation when the inverse is much more likely. Tuca & Bertie’s Adult Swim revival is only the second series to be brought back this way; Netflix’s One Day at a Time remake was picked up by Pop TV (the U.S. network that’s also home to Schitt’s Creek) for a fourth season after Netflix canceled it, is the other.

And it’s also another instance of Adult Swim, which faced massive criticism just a few years ago for not having any shows created by women, starting to support more female-driven shows as part of the network’s original programming slate. Just two days ago, it renewed Three Busy Debras—which is created by Sandy Honig, Mitra Jouhari, and Alyssa Stonoha and is produced by Amy Poehler—for a second season.