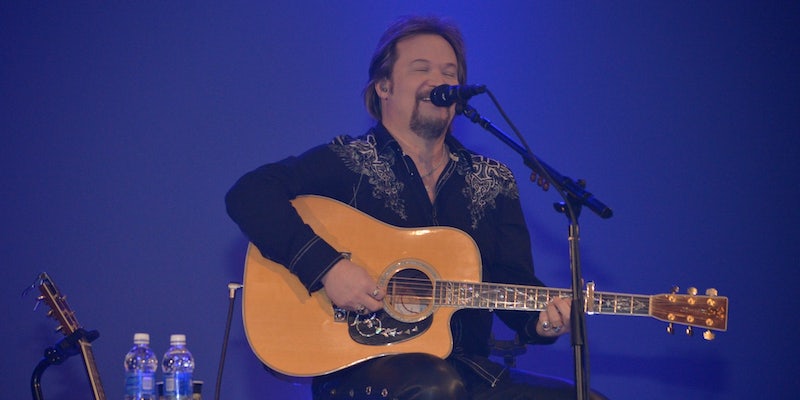 Travis Tritt became a formidable name in country music in the 1990s, releasing a string of platinum albums and scoring dozens of Top 10 hits on the Billboard country charts. But these days, he’s making himself known to a whole new generation as an anti-leftist Twitter warrior who’s going on a #resistance-blocking spree.

Tritt began trending on Twitter on Sunday after he echoed actor James Woods’ reminder to block Twitter users with #resist in their bios. Woods, an avowed Trump supporter, alleged that blocking #resistance accounts “slows them down and offsets Twitter’s shadow-banning of conservative accounts.”

“Per my friend @RealJamesWoods, type #resist in your Twitter search bar. Block at least twenty of these accounts per day. We will soon make them as irrelevant as they have tried to make the rest of us,” wrote Tritt, who has not released a studio album of original material since 2007.

Based on social media reactions, it seems that while Tritt was actively seeking out accounts to block, the owners of those accounts had not thought about the singer for years.

“Travis Tritt has blocked me and this is only the second time I’ve thought about him,” Better Call Saul actor Michael McKean tweeted in response to the snub.

Artist and writer Tony Posnanski also found himself on the receiving end of Tritt’s blocking spree, though he seemed unbothered. “I just found out Travis Tritt blocked me and I got so mad that I Googled who he was, went to the local flea market, bought his latest cassette, and threw it in the trash,” he wrote.

Author and Occupy Democrats editor Grant Stern noted the irony of Tritt’s and Woods’ anti-leftist Twitter crusade in one succinct tweet: “Travis Tritt and James Woods are looking to cancel you if you #resist, because they hate cancel culture.”

Amid Tritt’s blocking spree, several people also latched onto a press photo of the singer and compared him to androgynous Culture Club frontman Boy George.

Others, however, argued that Tritt doesn’t deserve to be mentioned in the same breath as Boy George, an LGBTQ+ icon known for his humanitarian work, as well as smash hits like “Do You Really Want to Hurt Me” and “Karma Chameleon.”

“OK, I know everyone wants to rip on Travis Tritt’s look, but there’s no reason to drag Boy George into this,” @mikeynerd tweeted. “Couldn’t you just say he looks like if you took a piece of shit, threw a goatee, hat, and some makeup on it, then traveled back in time to the 90’s for a GlamorShot’ [sic]?”