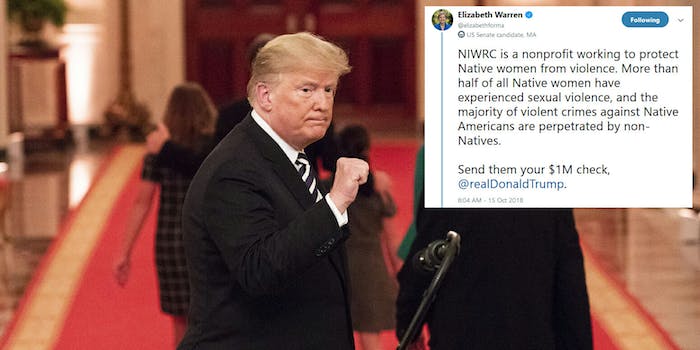 Trump made an offer in July.

President Donald Trump denied that he offered to donate $1 million to Sen. Elizabeth Warren‘s (D-Mass.) “favorite” charity if she took a DNA test to prove her heritage.

The denial of the remarks—which he made at a rally in July—came after Warren released a DNA analysis that “strongly support” Native American ancestry, according to the Boston Globe. The president has repeatedly referred to the Massachusetts senator as “Pocahontas,” and mocked her for claims about her ancestry.

On Monday, just hours after the results of the DNA test was made public, the president denied making the charity donation offer and said “who cares” when asked about Warren’s test, according to pool reports.

“I didn’t say that. You’d better read it again,” the president said.

Trump clearly made an offer when talking about a hypothetical presidential run from Warren during a rally in July. The president said if the two of them were to debate, he would give her a DNA test to take.

“We will say–’I will give you a million dollars to your favorite charity, paid for by Trump, if you take the test and it shows you’re an Indian,” he said at the time.

It could be that the president said he would only pay the $1 million for a test he gave her.

On Monday, Warren reminded the president of his claims and asked him to send the $1 million to the National Indigenous Women’s Resource Center.

“By the way, @realDonaldTrump: Remember saying on 7/5 that you’d give $1M to a charity of my choice if my DNA showed Native American ancestry? I remember – and here’s the verdict. Please send the check to the National Indigenous Women’s Resource Center,” she wrote in a series of tweets. “NIWRC is a nonprofit working to protect Native women from violence. More than half of all Native women have experienced sexual violence, and the majority of violent crimes against Native Americans are perpetrated by non-Natives. Send them your $1M check, @realDonaldTrump.”

She also mocked him for not releasing his tax returns.

“I took this test and released the results for anyone who cares to see because I’ve got nothing to hide. What are YOU hiding, @realDonaldTrump? Release your tax returns – or the Democratic-led House will do it for you soon enough. Tick-tock, Mr President,” she wrote.

NIWRC is a nonprofit working to protect Native women from violence. More than half of all Native women have experienced sexual violence, and the majority of violent crimes against Native Americans are perpetrated by non-Natives.

Send them your $1M check, @realDonaldTrump.