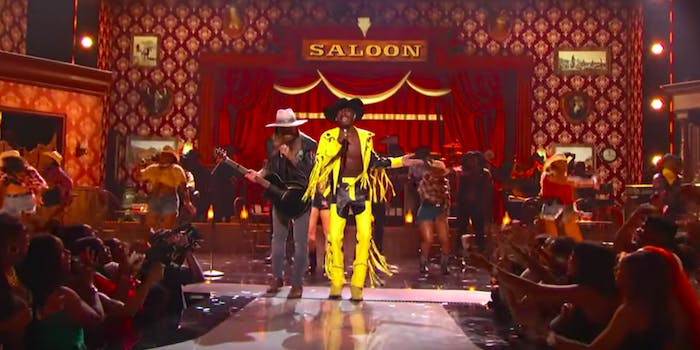 But he insists 'Old Town Road' is 'just about horses.'

Lil Nas X came out as a member of the LGBTQ community on the last day of Pride Month, and since it’s 2019 that should be the end of the story.

While many fans expressed their support for the viral sensation, some took the opportunity to sling around homophobic jokes about him and his viral hit, “Old Town Road.”

In true Lil Nas fashion, he laughed off the hate in a series of tweets.

One of the most viral, negative comments came from fellow rapper Boosie Badazz.

“WELL NOW U KNOW WHAT HE WAS RIDING ON THE OLD TOWN ROAD,” he commented on Lil Nas’ coming-out post, along with an eggplant emoji.

This earned Boosie a wave of criticism from Lil Nas’ fanbase. Many were quick to remind him that “Old Town Road” has been on the Billboard charts for months now, while none of Boosie’s songs have.

Lil Nas X counting money while boosie hates from outside the charts https://t.co/m33pgYdZYB

Lil Nas waved off the comments with hilariously blase tweets.

“‘Old Town Road’ is literally about horses,” he tweeted Monday.

It’s also the longest-running Hot 100 hip-hop single of all time, according to a post he retweeted soon after–no doubt as a flex.

On Instagram, he posted a cowboy emoji holding a gun along with the caption, “say one more home of phobic thing to me.” It currently has more than 600,000 likes. He also jokingly threatened to kiss the next person who made an offensive comment.

say one more home of phobic thing to me

next nigga to say something offensive to me getting kissed

His confidence is completely understandable considering his new EP has been doing fire–the video for the single “Panini” has 14 million views on YouTube alone.