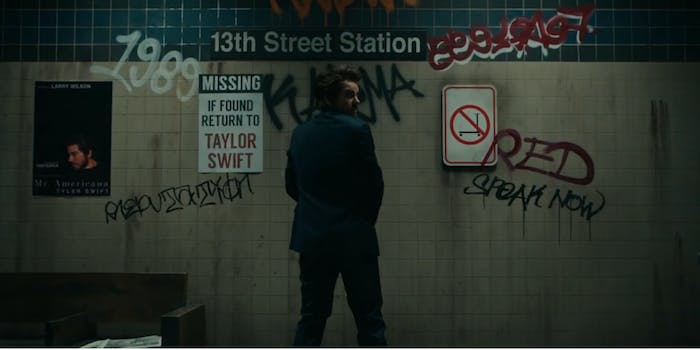 Taylor Swift‘s new video for “The Man” is a buffet of subtle and not-so-subtle references, including an apparent dig at manager Scooter Braun.

The dig might not have been obvious to the casual viewer, but Swifties noticed a tableau: Swift, as “the man,” pissing on a wall with a “no scooter” sign, and a “missing” sign surrounded by the names of the albums Braun now owns.

Last summer, Braun purchased Swift’s masters from former label Big Machine Label Group, which Swift claimed she had no prior knowledge of. The drama between her, Braun, and Big Machine head Scott Borchetta continued into the fall: In November, Swift sent out an SOS to fans, asking for help with the masters dispute, and Braun claimed he was getting death threats from Swifties.

While there still doesn’t appear to be any resolution on that front, the video is a stand-in. Fans pointed out that Swift also called out Borchetta on a subway poster.

TikTok star Loren Gray also makes a cameo, delivering the perfect eye-roll as “the man” throws a tantrum on the tennis court.