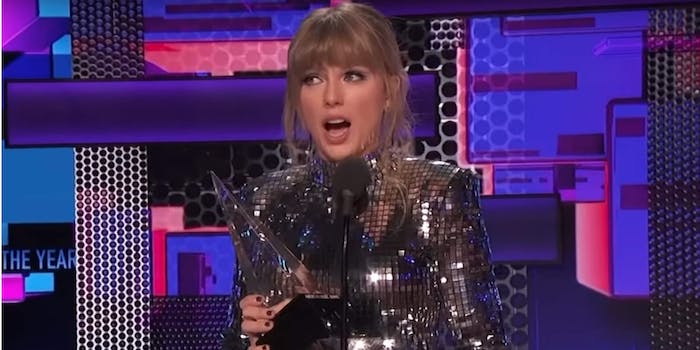 Ahead of the American Music Awards, Scooter Braun says he just wants to talk.

A week after Taylor Swift issued a call to her fans to help her with a complex music-rights dispute involving a private equity firm, Scooter Braun has asked for a “resolution” after reportedly receiving death threats.

Braun, the producer whose company purchased Swift’s pre-Lover masters over the summer, posted a lengthy response to Swift on Instagram, stating that in the last week there have been “numerous death threats directed at my family.” He included a screenshot of a message threatening him and his children, and said his wife “received a phone call threatening the safety of our children.”

Braun added that he’s “open to ALL possibilities” in regards to resolving the ongoing dispute over the rights to Swift’s older music, and stressed that she is allowed to perform any songs she wants at Sunday’s American Music Awards, something Swift had previously said she was being blocked from doing.

“Moving forward I would like to find a resolution,” he wrote, citing that Swift has allegedly not responded to his requests to “have an open discussion” over the last six months.

In the midst of the dispute over the AMAs performance, Swift’s former label Big Machine Label Group claimed it had reached a deal with Dick Clark Productions granting licensing, but added: “It should be noted that recording artists do not need label approval for live performances on television or any other live media. Record label approval is only needed for contracted artists’ audio and visual recordings and in determining how those works are distributed.” That could apply to the upcoming Netflix documentary about Swift, which was also listed in her distress call.

Swift is receiving the Artist of the Decade award at the AMAs, and there’s been speculation that she’ll use her speech to address Braun and Big Machine. According to TMZ, Vegas is betting on it. There are also rumors that other musicians will join her onstage; Green Day’s Billie Joe Armstrong hinted on Instagram that they’re performing “Bad Blood.”