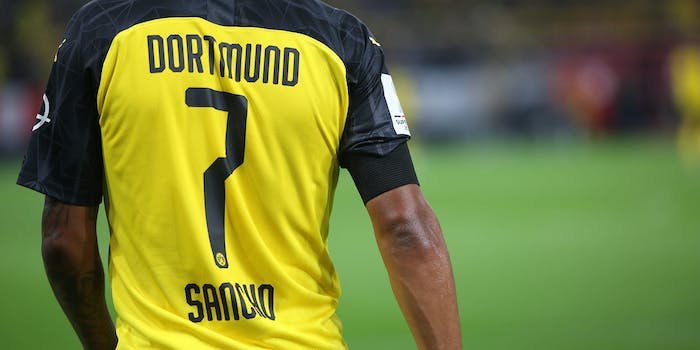 How to stream Dortmund vs. Schalke live

Dortmund and Schalke will face off behind closed doors on soccer's return from the pandemic.

Here’s everything you need to know to live stream Dortmund vs. Schalke on Saturday.

The Bundesliga returns this weekend with a major match to get us all back into the sporting mood. With soccer still not back in most areas of the world, all eyes are on Germany to deliver … so it’s a good thing they’ve got a trick up their sleeve in the Revierderby. Dortmund and Schalke have been fighting it out to see who gets the bragging rights in the Ruhr region, and surprisingly, despite the standings each year, Schalke have done well to put up a fight against the often stronger Dortmund. The reverse fixture ended in a goalless draw, while last season the Royal Blues took all three points in Dortmund.

Yet Dortmund is the strong favorite in this match, given that the team is sitting second, four points behind leaders Bayern Munich. Despite being kicked out of the Champions League by PSG, the side is trouble in the league, having won its last four matches, including the Borussia Derby against a none-too-shabby Mönchengladbach team that is awfully good at defending.

Schalke’s not doing poorly in the league, exactly; they are sixth, but 12 points behind a Champions League spot. They were likely hoping the BVB players may be a bit burned out from giving their all in Paris, but that occurred in BP (Before the Pandemic) and seems so long ago that it’s tough to remember how much energy they exerted. And—obviously—both sides are likely to be well-rested. This derby will likely come down to whether Dortmund’s possession-focused wingbacks are on form, in which case they will easily counter what is normally a not-very-good Schalke defense.

Also in Dortmund’s favor: Erling Haland and Jadon Sancho. Jadon Sancho and Erling Haland. These two teenage wonders have scored 23 goals between them. And while Thorgan Hazard isn’t there to score goals but to provide these youngsters with the ball and direct play on the pitch, he’s still contributed five goals while Marco Reus has been out injured.

Schalke has one advantage in this game, and it’s that their players won’t encounter the Yellow Wall, the infamous Wesfalenstadion stand in which Dortmund fans, dressed in their team’s bright yellow, stand, sing, chant, and generally make life miserable for the opposing team. That said, Schalke has had a miserable few weeks, slipping back into the side’s old ways by losing leads (also known as “doing a Schalke” or “Schalkeing it up”). Schalke haven’t won a match since January, yet the club is still sixth in the Bundesliga table, which might tell you a thing or two about how strange (and thrilling) it is to watch German soccer.

There’s another bonus for American fans too: Schalke’s Weston McKennie and Dortmund’s Gio Reyna are two young U.S. national players developing in the Bundesliga. If they’re playing, you can get a sense of how the Yanks’ World Cup future might look.

The match will be featured on both FS1 and Fox Deportes. Though this is Fox’s last season with the Bundesliga TV contract, they’ll certainly welcome world-class soccer’s return to TV.

AT&T TV Now is a bonus for AT&T wireless customers, especially for those who happen to be soccer fans. It provides instant access to more than 45 channels, including local channels. That means NBC as well as NBCSN for Premier League action, Fox as well as FS1 and FS2 for MLS, Bundesliga, the U.S. men’s and women’s teams, and even Liga MX offerings, and ESPN and ESPN2 for its array of soccer and other sports programming. It even offers free HBO on PLUS and MAX channel suites. Plus, it comes with CloudDVR for up to 20 hours of TV recording per month. One account works on two devices, but you can add more devices for only $5. AT&T TV Now includes Fox Deportes in its Optimo Mas package.

According to the DraftKings Sportsbook oddsmakers (as of May 12):

On the horizon: Bayern vs. Dortmund in Der Klassiker

The Bundesliga gods have scheduled Der Klassiker, or the “German Classic,” for Tuesday, May 26, with a 12:30pm ET kickoff. Those on the East Coast might want to schedule in an extra-long lunch for this one, because it’s when Bayern Munich (currently topping the table) and Borussia Dortmund (currently in second) face off. Last time Bayern won 4–0, so you know BVB will be set to prove themselves.