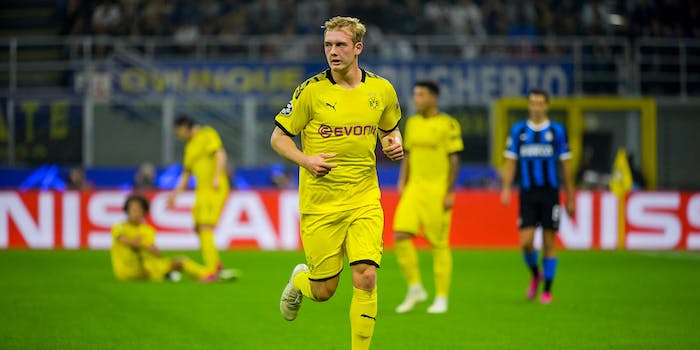 How to stream Borussia Dortmund vs. Wolfsburg

Dortmund may have the best squad in the world right now. Can Wolfsburg push them on Saturday?

Here’s everything you need to know to live stream Dortmund vs. Wolfsburg on Saturday.

What can we say? Wolfsburg pulled out a heroic performance last week by snatching all three points at the last minute, but the likelihood of that happening this weekend is almost nil. Dortmund are just too, too good.

Just look at the BVB squad. It includes teen phenom Erling Håland, with ten goals in nine appearances, and Jadon Sancho, an attacker with 14 goals that Lucian Favre didn’t even feel the need to put on to start against Schalke last weekend. Instead he used Julian Brandt, who’s all of 24 right now, on the right, and the former wunderkid involved himself in all four goals. Then he’s got Thorgan Hazard, who played impressively even while battling a cramp. And Favre’s now-favored three-man defense limited Schalke’s attempts on goal to just three on target.

In other words, there’s just not much to give Wolfsburg a boost of good juju going into this match. It’s hard to even talk up American defender John Anthony Brooks, who was instrumental in last week’s win. Wolfsburg did manage to hold RB Leipzig to a draw before the COVID-19 break, so they’ve proved they can stand their ground against top teams at times. Against BVB, that might be the very best thing they can do.

This match will feature on FS1 and TUDN.

Borussia Dortmund‘s return to play last weekend, vs. Schalke, in the famed Revierderby, would best be described as a walkover. It’s a rivalry that usually results in at least something interesting happening. This time, the interest all fell on one side of the field—Dortmund even held nearly 60% of the possession in the 4-0 win. Schalke did sneak in almost as many shots, but nothing was going their way in Dortmund that day. Teen sensation Erling Håland scored the first, and Raphaël Guerreiro bagged a brace, while Julian Brandt came away with two assists, and Thorgan Hazard both scored and assisted.

Wolfsburg may be in sixth in the Bundesliga, but their recent performances have been a bit stale, making its 2-1 win against Augsburg all the more welcome. It looked an awful lot like the Wolves would be headed to their third straight draw. Renato Steffen gave Wolfsburg the lead just before the halftime whistle blew, but Augsburg, struggling to ensure their safety, snagged an equalizer thanks to Tin Jedvaj. Wolfsburg was obviously the better side, with 60% possession and twice the number of shots as Augsburg, but it took until added time to find the go-ahead goal the squad desperately sought, thanks to Daniel Ginczek.

According to the DraftKings Sportsbook oddsmakers (as of May 22):