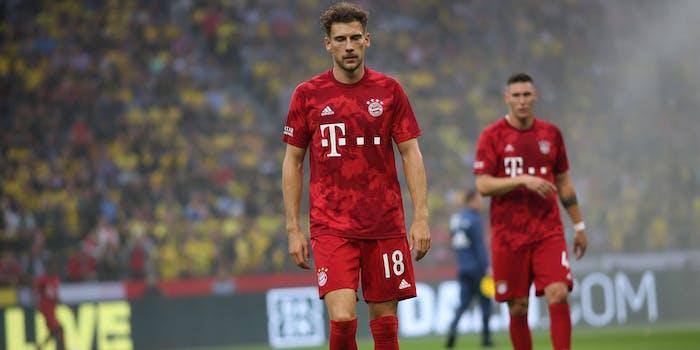 How to stream Bayern Munich vs. Borussia Dortmund live

This could be the best soccer match of the year in the Bundesliga.

Here’s everything you need to know to live stream Bayern vs. Dortmund live on Tuesday.

A Dortmund win wouldn’t quite shift the balance of power in the Bundesliga, since Bayern would still hold a one-point lead in the table, but it would set up for a true title race in the final weeks. A Bayern win, on the other hand, would likely create enough distance between it and its rivals to all-but-guarantee an eighth straight title.

The last time either Bayern or Dortmund didn’t lift the trophy, it was 2009, Wolfsburg was declared the winner, and RB Leipzig—this year’s other serious title contender—was just launching as a franchise.

The match will feature on FS1 and Fox Deportes.

Bayern Munich made relatively easy work of Eintracht Frankfurt last Saturday in a 5-2 win. Leon Goretzka opened the scoring, and Robert Lewandowski, Thomas Muller, and young Canadian sensation Alphonso Davies joined in the fun. It might have been 4-0 if not for Martin Hinteregger. He scored a brace to get Eintracht within a goal, but also was credited with an own goal that came after Davies’ insurance goal, to lead to the final tally.

Borussia Dortmund put distance between itself and Wolfsburg with a 2-0 road win, also on Saturday. Erling Haland didn’t add to his goal-a-match total; in fact, he whiffed on a cross that Raphael Guerreiro put away in the 32nd minute for the opening goal. Achraf Hakimi doubled Dortmund’s lead in the 78th minute, and then Wolfsburg lost Felix Klaus to a red card to help seal the victory.

According to DraftKings Sportsbook, Bayern is favored in Tuesday’s match.