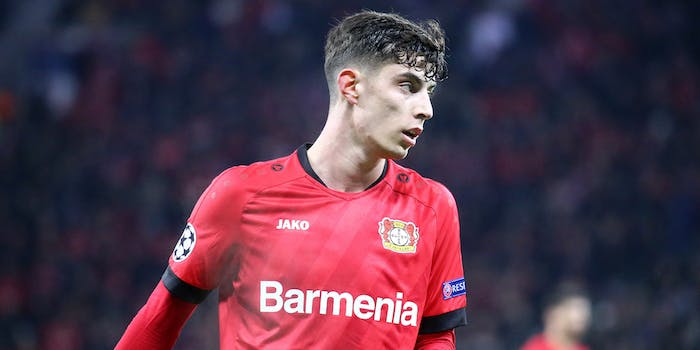 How to stream Bayer Leverkusen vs. Borussia Monchengladbach

If you're a fan of good soccer, or syllables, Bayer Leverkusen vs. Borussia Monchengladbach is for you!

Here’s everything you need to know to live stream Leverkusen vs. Gladbach on Saturday.

Bayer Leverkusen is not the team Borussia Mönchengladbach wants to host right now. While Leverkusen may have had a slow start to the season, it has grown into a force to contend with, having won seven of its nine 2020 matches. Gladbach might sit higher in the standings, but a win for Leverkusen will result in a reversal of the Foals’ good fortune. The hosts have won just five of their last nine games, and most were against teams in the bottom half of the table. If Gladbach really want to prove it’s a title contender, it’ll need to come away with at least a point.

Whatever the scoreline reads at the end, it’s likely this will be a match worth waking up for. Neither team has a “star” in the traditional sense; instead, the goals are scattered among a number of players as both teams seek to press and maintain possession. Gladbach averages two goals a game and Leverkusen are just behind; in addition, both have given up the same number of goals, 31 — a number beaten only by RB Leipzig and Bayern Munich. However, the Magic 8 Ball shows this number will almost certainly go up by the time the whistle blows at the end of the match.

For Gladbach, the goals are likely to come from its French attacking duo, Alassane Pléa and Marcus Thuram. (Unfortunately for the Americans tuning in, Fabian Johnson has been plagued with injuries this season and is sidelined once again.). Meanwhile, Leverkusen will be bringing the young and exciting Kai Havertz, who scored 17 for Die Werkself last season and very nearly controlled the entire match at Bremen last week. (For you Chelsea fans out there, Havertz is drawing Eden Hazard comparisons and transfer rumors to the Blues.)

This is one that will be tense for the fans, but a joy for the neutrals: exciting young players, veterans who can still pull off perfect passes, quick runs, and lots of pressure.

This match will be shown on FS2 and Fox Deportes.

Leverkusen had an easy time of it last week, going up against a Werder Bremen team struggling to escape relegation. The fun started in the 28th minute when Bayer’s Kai Havertz nodded one in from the back post. Surprisingly, the hosts struck back almost immediately when Theodor Gebre Selassie flicked in a corner kick. Werder’s hopes were dashed almost immediately when Havertz headed in another. Their third saw Havertz involved again, feeding Moussa Diaby who chipped it to Mitchell Weiser to nudge in. Leverkusen scored its final goal of the match, a lovely chip from Kerem Demirbay, to leave with a 4-1 win.

It took just 40 seconds for Gladbach‘s Alassane Pléa to all but dash Eintracht Frankfurt’s hopes last weekend, and it’s quite possible that not all fans had finished settling in with their preferred beverage when the Foals upped their tally. Ramy Bensebaini turned the Eintracht defender inside out before sliding the ball over to Marcus Thuram to tap in before seven minutes were up. Then Bensebaini himself converted a penalty in the second half. But because Gladbach is Gladbach, the team just cannot keep a clean sheet this season, André Silva scored a consolation goal for Eintracht for a 3-1 final.

According to the DraftKings Sportsbook oddsmakers (as of May 22):