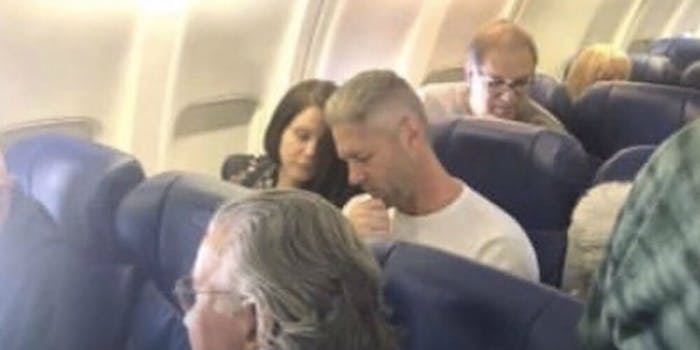 'We love an environmentally friendly queen.'

Lana Del Rey and boyfriend Sean Larkin were spotted on a commercial flight in economy class. While many lauded the couple for not chartering a private jet, one fan took the opportunity to mock Del Rey.

Twitter user @ZoniaDeluxe, whose account has since been suspended, tweeted out a photo of Del Rey and Larkin seated next to each other on the flight.

“‘Money is the anthem of success’ my ass,” ZoniaDeluxe wrote, per indy100, in an apparent riff on Del Rey’s song, “National Anthem” from her 2012 sophomore album Born To Die.

Fans flocked to the singer’s defense.

“Taking an economy flight to help save the planet instead of using a private jet omg we love an environmentally friendly queen,” Twitter user @lolitasdead wrote in response.

“She can afford private jets I don’t understand why you’re trying to drag her,” Twitter user @ivettedelrey wrote.

we love and enviromental friendly queen

Fans also pointed to other possible reasons as to why Del Rey might be flying commercial.

“Lana is actually really frugal. She’s had a cracked iPhone 6 for a long time. Clearly not a money problem since she keeps winning with each album,” Twitter user @lyndorferret wrote.

In September, fans noticed that Del Rey still used an iPhone 6 after she was filmed reading lyrics from it to sing a cover of Ariana Grande’s “Break Up With Your Girlfriend, I’m Bored.”

Lana is actually really frugal. She’s had a cracked iPhone 6 for a long time. Clearly not a money problem since she keeps winning with each album

queen of being cheap

With climate change becoming an ever-pressing issue, most recently made evident by the Australia bushfires, there has been immense pressure on celebrities to be more eco-friendly when traveling. The Kardashian-Jenner clan alone is constantly dragged for taking their private jets everywhere, from simple lunch dates to lavish vacations. So, regardless of the reason behind Del Rey flying commercial, the impact it has is notable.