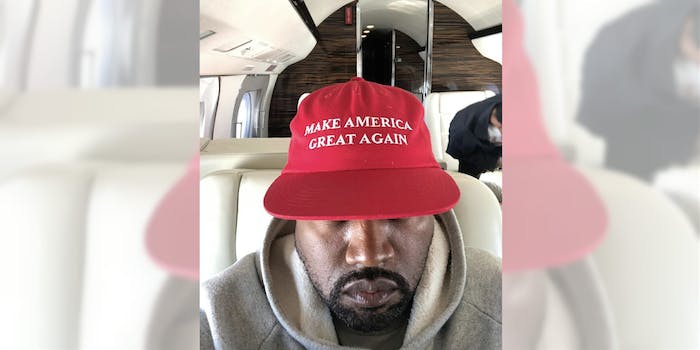 Kanye West is stoking a politically-fueled fire again, and Lana Del Rey has had enough—but that’s not even the half of it.

It all started when West, aka Ye, appeared on the 44th season premiere of Saturday Night Live this weekend. (Apropos of nothing, for the performance of “I Love It,”  Ye dressed as a bottle of Perrier alongside Lil Pump, who wore a Fiji water costume.)

my GOAT would never. pic.twitter.com/d4ltVIoZSP

Following his SNL performance and an unaired political rant, Ye posted a photo of his “Make America Great Again” hat on Instagram, stating that the hat “represents good and America becoming whole again.” In a video posted to Twitter, Ye alleges that SNL producers tried to “bully” him out of wearing his MAGA hat during his final performance.

“Trump becoming our president was a loss for the country but your support of him is a loss for the culture,” Del Rey wrote. “If you think it’s alright to support someone who believes it’s OK to grab a woman by the pussy just because he’s famous then you need an intervention as much as he does.”

.@LanaDelRey destroys @KanyeWest with comment under his pro-Trump Instagram post: “I can only assume you relate to his personality on some level. Delusions of Grandeur, extreme issues with narcissism” pic.twitter.com/po6dghzWMc

Del Rey added that Ye might relate to the president due to their shared “delusions of grandeur” and “extreme issues with narcissism.”

Azealia Banks jumped in the conversation on Twitter, criticizing Del Rey and saying that Ye is not “the enemy.”

“To me this just looks like the typical White woman taking using a weakened target to pretend to be an ally,” Banks wrote.

Ye’s Instagram caption also mentioned his desire to abolish the 13th amendment, which ended slavery and indentured servitude in 1864. The comment drew more criticism from other celebrities, including Captain America’s Chris Evans.

West clarified in a later tweet that he wanted to amend the amendment, not abolish it, because the 13th Amendment “is slavery in disguise.”

As a Washington Post columnist points out, he’s not totally wrong about that. The original amendment says that “neither slavery nor involuntary servitude, except as a punishment for crime whereof the party shall have been duly convicted, shall exist within the United States, or any place subject to their jurisdiction.” This implies that people convicted of crimes aren’t protected by the 13th Amendment. Ye posted a link to the Post article and thanked the publication for backing him up.

With so many layers to the drama, it’s hard to say what comes next. One Twitter user summed up the commotion in less than 140 characters.