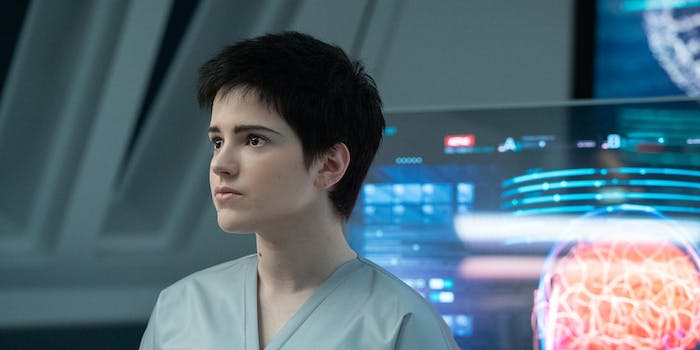 This week's 'Star Trek: Discovery' was an intriguing callback to 'Deep Space 9.'

This post includes spoilers for Star Trek: Discovery 3×04, “Forget Me Not.”

This week’s Star Trek: Discovery is one of the most interesting to date, offering a compelling-but-problematic debut for Star Trek’s first trans and nonbinary characters. They’re a young couple whose role ties into the culture of an alien race, the Trill. Introduced in The Next Generation, humanoid Trills can “join” with a symbiotic species from their homeworld. These Trill hosts accept a slug-like symbiont into their body, absorbing centuries of shared memory from its previous hosts. The most famous example was Jadzia Dax in Deep Space Nine, whose gender identity was notably ambiguous for a show airing in the ’90s, and who shared one of the first same-sex kisses on American TV. So we have a long-established legacy behind Star Trek’s first canonically trans Trill… who gets killed off in a matter of minutes.

Thankfully, the situation is more complicated and less horrifying than that sounds.

Discovery begins by introducing a new angle on the Trill/symbiont concept. Adira (Blu del Barrio) arrived in last week’s episode, joining the crew after a clash with Earth’s trigger-happy new defense force. She’s bonded to a Trill symbiont, but there’s a twist: She’s human, so she can’t access her symbiont’s past lives. To make matters worse, Michael Burnham really needs some information from one of those previous hosts. Looking for some expert advice, Michael takes Adira to the Trill homeworld, where she can hopefully learn to accept her dual identity and access those memories. Yes, this episode is all about therapy.

Predictably, the Trill leaders have mixed feelings about Adira. Trill symbionts are a rare commodity, and Adira—an outsider—never wanted this in the first place. The symbiont’s previous host was her boyfriend Gray (The OA’s Ian Alexander), who died and transferred the symbiont into Adira’s body out of pure desperation. It’s hardly the sacred joining that most Trills hope for. But in the end, one of the locals agrees to help Adira by dunking her into a glowing spiritual jacuzzi, where she can plumb the psychic depths of her shared subconscious.

We saw this element of Trill culture in Deep Space Nine, where Jadzia Dax embraced memories and relationships from her symbiont’s previous lives. Adira’s role is rather different. In order to accept her new symbiotic identity, she must confront painful memories of Gray’s death. Back on the U.S.S. Discovery, another therapy-adjacent subplot plays out with Saru hosting a family meal for the crew. They’re all traumatized by their one-way trip into the future, and the dinner explodes into a cathartic mess of emotional breakdowns. No one is doing well, but it’s a rare example of Star Trek tackling mental health in a coherent way, rather than featuring wildly ill-informed depictions of “counseling” (Troi! Ezri Dax!) or having characters stew in their own untreated trauma.

As the first trans and nonbinary characters in the franchise, Gray and Adira have already received a lot of media attention. This episode doesn’t mention their gender identity on-screen, but that’s arguably better than the kind of clunky intro we often see on TV. I doubt anyone really wants a character to introduce themselves with an educational coming-out monologue. It was a little surprising to hear Adira use she/her pronouns when actor Blu del Barrio goes by they/them, but this is something del Barrio already tackled in interviews. Speaking to Entertainment Tonight, they explained that they “grew alongside” Adira in real life:

“I care a lot about an accurate representation of Adira and trans representation, especially. Because I wasn’t yet fully out to a lot of my family and some of my friends still, I didn’t feel comfortable right off the bat having everyone use they/them pronouns for Adira because I wasn’t out to everyone yet.”

Del Barrio had a lot of creative input here, much like how their co-star Ian Alexander shaped his breakout role as a trans teen in The OA. This follows on from Discovery’s early decision to cast queer actors as the show’s first same-sex couple, Paul Stamets (Anthony Rapp) and Hugh Culber (Wilson Cruz). In another interview, del Barrio said, “They really put us in control of what we wanted to happen with Gray and Adira in terms of their gender and of their queerness.” This may explain why these characters are so chill and likable, while the framing device for their storyline… is not. Discovery’s creative team have an inclusive attitude to its cast, but that framing device initially came from the writers’ room, and was already baked into those roles before the actors arrived.

There was a definite “yikes” moment when we learned that Gray was already dead, falling foul of the widely-criticized trend for killing off LGBTQ+ characters. (Discovery already did this once, with Hugh Culber’s temporary death.) But while Gray is technically dead, he’s narratively alive. The episode ends with Adira hanging out with Gray’s ghost, suggesting that he’ll have a recurring role instead of a tragic send-off. After all, Gray lives on in Adira’s symbiotic memory. It’s an intriguing idea, but some viewers will be understandably pissed that Gray had to die to make it happen. The show literally introduced a groundbreaking trans character by killing him off! So despite Gray’s recurring role in the afterlife, that’s going to be a controversial choice.

In general though, “Forget Me Not” was a strong episode. The Trill homeworld setting felt retro without being a total nostalgia trip like Star Trek: Lower Decks, and I’m glad to see Discovery prioritize emotional growth over action. Discovery’s crew members are deepening their relationships and confronting their trauma, while Gray and Adira make an incredibly charming new addition to the cast.

Star Trek has a mixed history with teen characters, the most famous examples being the infamously annoying Wesley Crusher in TNG, and the likable, well-characterized Jake Sisko in DS9. Adira and Gray’s age isn’t specified, but they feel very youthful in an endearingly dorky way. Adira is a nerd who quickly bonds with Stamets, setting the foundations for a queer found-family arc in later episodes. And even from their very brief scenes together, we get a clear idea of Gray and Adira’s relationship as a pair of amusingly sincere teens. In one flashback Adira gives Gray a homemade quilt commemorating important moments in their friendship, which really cements their image as the kind of couple that wears matching costumes to a Renaissance Faire. In other words, a fitting addition to Star Trek‘s long history of lovable dweebs.

WATCH NEXT: How Keira Knightley Became the Queen of Costume Drama