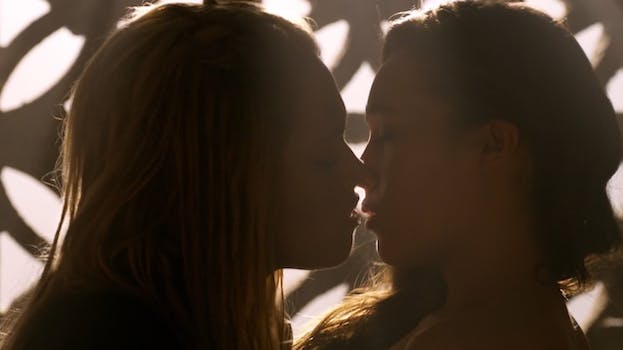 Warning: This article contains major spoilers for Season 3 of The 100.

Last Thursday, a major character death sent shock waves throughout the fandom for the popular CW sci-fi dystopia The 100. But while The 100 has long been known for its brutal, no-one-is-safe approach to killing off main cast members, this character’s death hit especially hard—not just for members of the fandom but members of queer communities across the Internet.

Over the weekend, what began as a groundswell of outrage among an already-troubled fandom quickly spread into a major ongoing conversation in fandom communities about the “dead lesbian” trope—a relic of the celluloid closet that has managed to stay alive much longer than the many queer characters who’ve been killed off in service to it.

One Hundred Billion Story Ideas That Don't Involve You Killing a Queer Woman is a book I'm going to write and give away for free.

The 100 is a unique show in many ways. Although it’s a CW show, it’s not just another teen drama. Its political themes, gripping plot, complex female characters, and deep study of a post-apocalyptic survivalist future have earned it major critical acclaim and an intense fan following. Last season, fans were thrilled when the main character, Clarke, began to develop feelings for another young woman named Lexa.

Clarke is one of the first canonically bisexual main characters on network television. She follows recent complicated queer leads like House of Card’s Frank Underwood and The Good Wife‘s Kalinda. But The 100 is a geeky genre series, arriving at a time when science fiction and fantasy narratives are being deeply interrogated by fans and challenged to provide greater, more meaningful and diverse representation. For queer fans who are vastly underserved by Hollywood’s current dearth of diverse GLBTQ characters, Clarke and Lexa’s relationship was a hugely positive thing.

But this season that came to an end. In an episode of The 100 podcast The Dropship, the episode’s writer, Javier Grillo-Marxuach, explained that the creative team had to write the character of Lexa out of the show because her actor, Alycia Debnam-Carey, had become a lead on Fear the Walking Dead:

“We considered a lot of different options, including the possibility that killing her would make a political statement that we were not comfortable with. But ultimately when you’re talking about this world and the stakes we’re dealing with, we genuinely came to the perspective in the writers’ room that this death would be the best way for us to, not only write the character out of the show, but protect ourselves against the possibility that we might never see the actor again ….
And honestly I think that in terms of the epic quality of the show … we honestly look at the story as an epic tale of shocking fate and destiny. And, you know, kings tend to not retire from being kings.”

Fans acknowledged that Lexa’s character might have to go, but heavily criticized the choice to off her the way she went on Thursday’s episode: killed by a random stray bullet, leaving Clarke and the fandom heartbroken.

Grillo-Marxuach acknowledged that fans would be “very unhappy” with Lexa’s death, but argued that the show’s narrative is “the struggle for love and humanity in an atavistic world that only understands conflict” and thus dictated the mode of the actor’s departure.

“I can’t control or dictate how people are going to react to a character death on the show, and obviously there’s a huge spectrum of, outside the narrative bubble of the show in terms of the LGBT representation and all that, that has to be addressed,” Grillo-Marxuach said. “The hope that these characters are going to find happiness and joy halfway through the series is a very poignant one, but is in no way borne out by any of the events of the show.”

But fans questioned the point of killing Lexa off in a manner that seemed to be so random and haphazard:

In the immediate aftermath of Lexa’s death, droves of fans compared not only the modes of the two deaths, but the heartbreak they felt as members of queer communities watching this cycle repeat itself. In a series of tweets, Autostraddle editor Heather Hogan expressed how many viewers felt.

What strikes me most is how many people are (rightly) comparing Lexa's death to Tara's, even though I know they're too young for Buffy.

It's not only a reminder that TV doesn't happen in a vacuum, but also that there are so few resonant lesbian storylines…

…that my 37-year-old experience is the same as an 18-year-old's experience because they've gone back and watched everything that mattered.

Our collective queer viewing experience, our entire pop culture canon, is the same across decades and generations.

That's why Lexa hurts almost every queer woman the same way, no matter how old they are or where they're from or any other qualifier.

Straight TV writers will never understand how they can inflict time-traveling wounds that hurt us as scared gay children all over again.

In the annals of cinema and queer history “the dead lesbian” trope can be found it in notable film, theater, and literature dealing with queer characters, from tragic lesbian groundbreaker The Children’s Hour to many of the most famous and influential lesbian novels. There’s an entire Tumblr devoted to chronicling the dead lesbian trope on television, which stretches back decades. Or you could just take a look at this Tumblr post, which began circling hours after Lexa met her demise:

Backlash from fans has been intense off social media as well. The IMDB rating for Thursday night’s episode currently stands at a 4.8 out of 10 after thousands of users flooded the site to downvote it following Lexa’s death. The Wikipedia entry for the show’s showrunner, Jason Rothenberg, had to be protected from vandalism after numerous updates were made accusing him of being homophobic as well as queerbaiting fans of Lexa and Clarke’s relationship.

Rothenberg also went on The Dropship to explain the decision, noting that he was “a little shaken by the intensity of the negativity,” and adding that “this is a show where people die, where main characters get killed. She’s the commander—that’s not a job with a long life expectancy.” But fans continued to argue that the decision was larger than the show’s individual narrative.

@JRothenbergTV @jopinionated @LeticiaCornish I just don't understand how you can't see how damaging your actions are to queer young women.

The societal argument in favor of killing off Lexa is that there should be room on television for a multiplicity of portrayals of queer characters, including characters who endure tragedy. This season, perhaps in anticipation of killing the Clarke/Lexa ship, The 100 did introduce another queer relationship in the form of the character Miller and an off-screen boyfriend, as well as another potential love interest for Clarke in the form of Niylah, a female character she’s already hooked up with once. And it’s true that there are a few notable happy queer relationships on TV—in Hannibal, for example, the show’s only relatively happy ending belongs to a female queer relationship. But as the Tumblr post above illustrates, those are exceptions to a general pattern of Hollywood killing off lesbians and ending happy lesbian relationships far too frequently.

Perhaps the most heartbreaking responses to Lexa’s death also underscore just how rarely happy queer female relationships appear on our screens. On Tumblr, a weekend reblog chain began, featuring queer women describing their own positive lives with their partners. “Our 13th anniversary is in two weeks,” one woman wrote. “We heard our baby’s heartbeat for the first time yesterday,” wrote another.

Again and again these women spoke of living happily ever after. “My girlfriend is amazing, I love her, and one day we’ll own 47 dogs together,” one wrote. “Someday we’re gonna live together in a glass house in the woods with a library in it,” wrote another. “I am in love.”

It shouldn’t be necessary for real-life queer women to reassure one another that they can and do live long and fulfilling lives with their wives and partners. These are realities we should see reflected on our screens. The 100 may eventually attempt to give Clarke a new positive relationship to replace the one she lost. But for now it least, it seems as though fans will have to make their own happy endings.