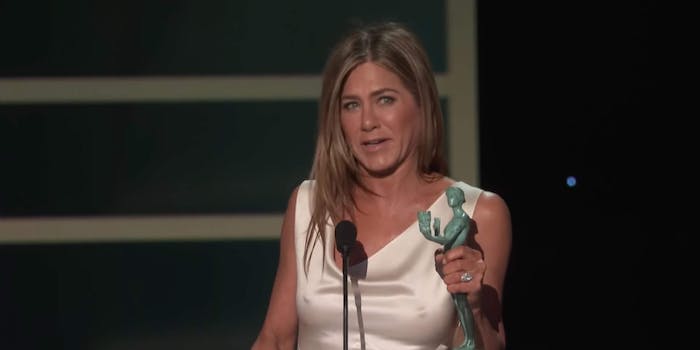 It was a big night for streaming at the Screen Actor Guild (SAG) Awards on Sunday night. Amazon and Netflix snagged two awards each while giving Apple TV+ one of its first major awards only three months after it launched.

The Morning Show has already been up for multiple Golden Globe nominations and series star Billy Crudup, who was nominated for a SAG (but lost to Game of Thrones’ Peter Dinklage) and won a Critics’ Choice Award earlier this month. But Apple TV+’s first SAG win was awarded to Jennifer Aniston, making it her first win since Friends was given an ensemble award back in 1996.

It was an emotional moment for Aniston, who highlighted The Morning Show cast and crew, from Reese Witherspoon and director Mimi Leder. She thanked head writer Kerry Ehrin for creating characters “that are so layered and complicated and messy and ugly and just beautifully human.”

Before she left the stage, she commended Adam Sandler for his performance in Uncut Gems, which was snubbed by SAG and the Oscars.

The Morning Show wasn’t nominated for outstanding performance by an ensemble in a drama series. That award went to Netflix’s The Crown for its third season.

On the comedy side, Phoebe Waller-Bridge picked up another award for her performance in Fleabag’s second season. In her speech, she touched on the “dream” of Fleabag’s dominance at awards shows over the past several months.

“This whole thing really has been a dream,” Waller-Bridge said. “And if I wake up tomorrow and discover it was just that, then thank you. It’s been the most beautiful dream.”

Fleabag ultimately lost the SAG for comedy ensemble cast to The Marvelous Mrs. Maisel, but the show was still on the minds of the Mrs. Maisel cast as Alex Bornstein immediately informed the audience that she voted for Fleabag and didn’t even cast votes for her co-stars.

“Honestly, this makes no sense,” she said. “Fleabag is brilliant. You guys are brilliant.”

Laura Dern picked up another supporting actress win for Marriage Story and gave an emotional speech in part because she was able to hug her dad, the actor Bruce Dern, before coming onto the stage.

“To all you actors, I literally—literally—would not be here if it weren’t for actors,” she said.

The Irishman, which was up for multiple SAG Awards including outstanding performance by a cast in a motion picture, went home empty-handed. The top award of the night went to the cast of Parasite.