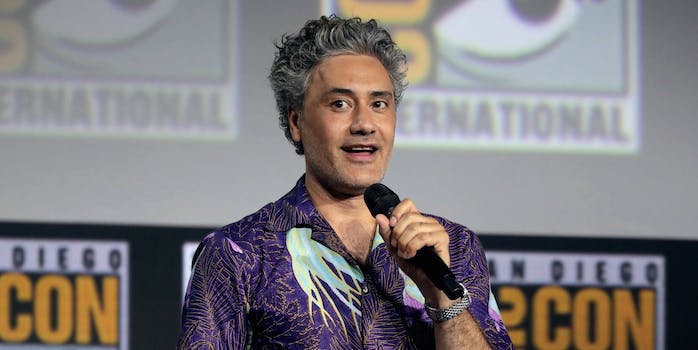 The 'Thor: Ragnarok' director is reportedly in talks with Disney.

Currently nominated for an Oscar for his World War II satire Jojo Rabbit, filmmaker Taika Waititi is reportedly being courted to direct a Star Wars movie.

Waititi has helmed a wide range of projects, from New Zealand indie dramas to the vampire mockumentary What We Do In The Shadows, but his biggest project to date is the sci-fi/fantasy blockbuster Thor: Ragnarok, soon to be followed by Thor: Love and Thunder. So, it was both welcome and fairly unsurprising news when we learned he was one of the directors working on The Mandalorian. He’s already said he’d be interested in directing an actual Star Wars movie next, and reports now suggest that might actually happen.

There’s no official comment from Waititi, Disney or Lucasfilm, but The Hollywood Reporter confirms that some kind of talks are taking place. It’s not clear whether this is connected to a Star Wars project that’s already been discussed in the public eye (for instance the film being developed by Marvel boss Kevin Feige), or if it’s something entirely new.

While Disney is pushing ahead with big-budget Star Wars streaming series like The Mandalorian and an Obi-Wan Kenobi spinoff, the future of the movie franchise is less clear. There’s going to be a gap of several years after The Rise of Skywalker, allowing the franchise to “rest” while Lucasfilm figures out what to do next. Several projects are in development—including a Rian Johnson trilogy that may or may not still be happening—but there’s no word on which will go into production first, or when those stories will take place in the Star Wars canon timeline.

Taika Waititi would certainly be a dream choice of director for many fans: A tried-and-tested blockbuster filmmaker with an interesting style and a great sense of humor, who is more than qualified to tackle the political themes of the franchise.