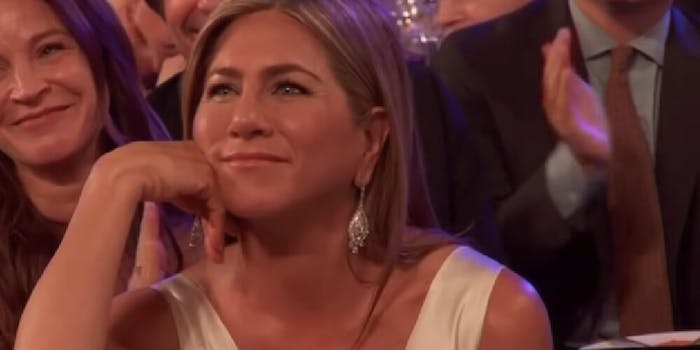 The couple seems over their relationship, but Twitter users sure aren't.

Jennifer Aniston and Brad Pitt both won on Sunday at the SAG Awards, but the real winners were Twitter users who are absolutely enthralled with pictures of the two taken at the ceremony.

Aniston and Pitt were the couple in the early 2000s. They ended their marriage in 2005, and while it seems like the couple is over it, Twitter users sure aren’t.

There are a few moments, in particular, that are making Twitter users hope that the couple is back together. (They aren’t.)

At the event, Aniston won an award for her role in The Morning Show. During her acceptance speech, Pitt watched from backstage and was reportedly smiling as she spoke.

“Caught this pretty cool moment when Brad stopped and watched Jen win her SAG Award, he couldn’t stop smiling,” E! host Jason Kennedy wrote on Twitter along with a video.

And then there’s a part during Pitt’s speech. As Pitt accepted his award for his part in Once Upon A Time In Hollywood, he made a joke and Aniston was seen laughing and clapping at the quip.

But what’s really breaking brains are a couple of photographs of Aniston and Pitt sharing a friendly moment at the awards show. One shows them laughing together, and the other shows him holding her hand as she walks away.

Jennifer Aniston and Brad Pitt backstage at the #SAGAwards2020. pic.twitter.com/yrM8atg2nx

When the pictures made their way onto Twitter, people began freaking out. Their names have been trending overnight.

“As someone who studied psychology for two days before quitting for criminology, I know this means he loves her and regrets everything,” Twitter user @BrishanRae jokingly wrote alongside a zoomed-in picture of Pitt’s and Aniston’s hands.

As someone who studied psychology for two days before quitting for criminology, I know this means he loves her and regrets everything. #JenniferAniston #BradPitt pic.twitter.com/8GHIEz898R

brad pitt and jennifer aniston ending all the rumors pic.twitter.com/e8S7q6VpQN

WHAT THE FUCK I WASNT READY FOR THIS OMFG JENNIFER ANISTON AND BRAD PITT WHAT THE pic.twitter.com/yxJ9vzSSNN

Me looking at photos of Brad Pitt and Jennifer Aniston at the SAG awards pic.twitter.com/Yi9MM9CV61

So while Sunday night was a career-defining moment for both of the actors, people were really only interested in the possibility of a romantic reunion.

“Look. If I can get My Chemical Romance and the Jonas Brothers back together, I can definitely get Brad Pitt and Jennifer Aniston back together,” musician Mark Hoppus wrote on Twitter. “2020 is the year I’m gonna make it happen.”

Look. If I can get My Chemical Romance and the Jonas Brothers back together, I can definitely get Brad Pitt and Jennifer Aniston back together. 2020 is the year I’m gonna make it happen.