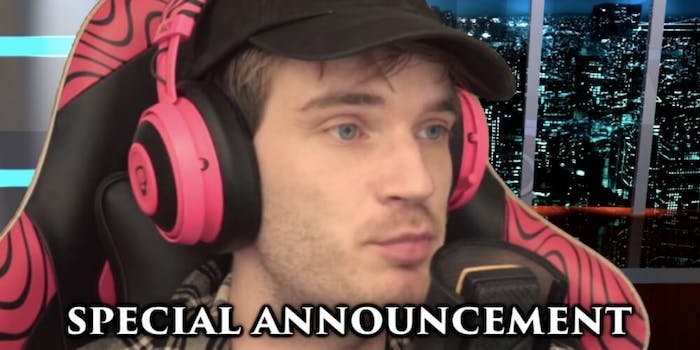 This isn't the first time the YouTuber has considered a break.

PewDiePie announced over the weekend that he’s decided to take “a break” from YouTube for a while starting in 2020.

PewDiePie is the most popular person on YouTube with about 102 million subscribers. (Production studio T Series boasts the most-subscribed-to channel, however, with 121 million subscribers.) The gamer started posting content in 2011, but he hinted in his latest video that he’s burnt-out.

It’s unclear how long his “break” will last. PewDiePie added that he would post a more comprehensive explanation later.

This isn’t the first time the YouTuber has hinted at a hiatus. In 2016, PewDiePie took a break from creating daily YouTube videos because it was “too much.” He also tried taking a day off once a week in 2014. And there have been rumors for years that he was feeling burnt-out and thinking about possibly scaling back his channel.

The gamer has often threatened to take breaks when YouTube announced changes that he’s not on board with. In his most recent video, he aired his frustrations about YouTube’s new harassment policies. The rules are now stricter against creators with “patterns of harassing behavior.” YouTube will be harsher when it comes to personal attacks based on race, gender, sexual orientation, and other attributes.

That might be a problem for a creator like PewDiePie. In recent years, the YouTuber has been in the middle of a lot of internet controversy. For example, earlier this year he begged fans to stop using the “Subscribe to PewDiePie” meme after the accused New Zealand mass shooter used the phrase in a live stream before killing 50 people. He’s also been repeatedly called out for racist, sexist, homophobic, and anti-Semitic comments.

And PewDiePie’s fans can be nothing less than extreme. He’s had to ask them to not do anything illegal on his behalf after fans defaced a World War II monument and hacked the Wall Street Journal‘s website.

Many fans tweeted out their support for the YouTuber after his announcement.

“PewDiePie just announced that he will be taking a break from YouTube starting next year,” Twitter user @SeraCld wrote. “For me, it is very sad but realizing that the past years have been very tiring for him also mentioning all these fucking canceling woke bitches going after him every day, I can’t blame him.”

PewDiePie just announced that he will be taking a break from YouTube starting next year, for me it is very sad but realizing that the past years have been very tiring for him also mentioning all these fucking cancelling woke bitches going after him everyday, I can't blame him. pic.twitter.com/JdhAbvD9T1

PewDiePie: yeah I'm taking a break in 2020 for a while

OMG WHAT PEWDIEPIE IS TAKING A BREAK NEXT YEAR!

Glad he is gonna take a break, though I will miss him.

Also thank fucking god he is taking a break. Making a daily video to the largest audience on youtube must drive a man fucking insane.