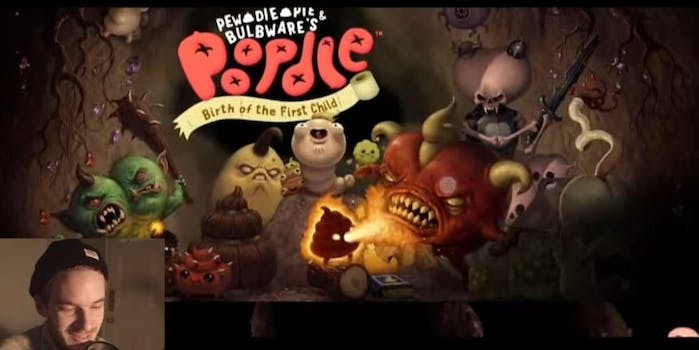 A new game developed by PewDiePie has been banned by Apple. And boy does the whole thing stink.

PewDiePie revealed in a YouTube video posted to his 102 million subscribers on Thursday that his beloved game, Poopdie, has been removed from the App Store (though it’s worth noting that the game is actually available in the Google Play store).

“Apple thought this game was too stinky for whatever reason,” PewDiePie, whose real name is Felix Kjellberg, said in the video. “… Right now, we’re working to fix that.”

As noted by the Daily Mail, the free game centers “around the main character, a worm, who creates minions from his bodily waste that go about doing his bidding. These take different forms, including ‘poopgrades’ and ‘fartspells.’” The worm’s name: Poopdie.

“This is truly the greatest game to play on the toilet,” PewDiePie said in his video.

Unfortunately for the YouTube star, Apple disagrees. But PewDiePie and his team aren’t giving up the fight. According to a blog on Bulbware, which developed the game, Apple removed Poopdie because it has “crude imagery and sound effect[s] which may disgust users.”

Wrote Bulbware: “Unfortunately  Apple seems to be disgusted by Poopdie and his army of little Troops. Small wormy got rejected … We are currently [appealing] to the Apple Review Board and plan to reach a settlement. C’mon Apple! We have received hundreds of iOS users’ requests who are eager to start pooping!”