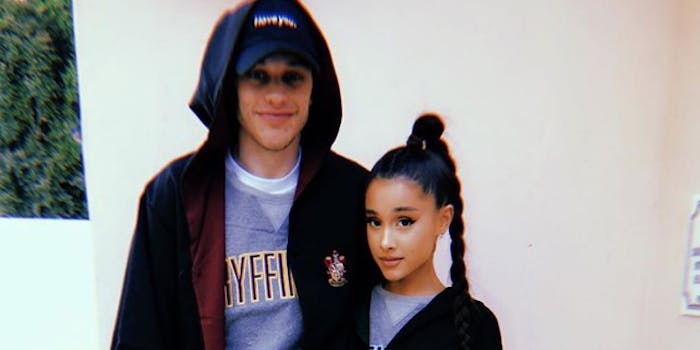 She's a Slytherin. He's a Gryffindor. They make it work.

Rumored couple Pete Davidson and Ariana Grande made things Instagram-official this afternoon with a pic from the Wizarding World of Harry Potter.

The pair has been linked since Grande’s early May appearance on Saturday Night Live, where Davidson is a cast member, but they hadn’t confirmed their new relationship on social media. It seemed they had some PR to take care of first—with Grande shutting down speculation that she was cruel for leaving ex Mac Miller, and Davidson addressing fan chatter that his mental health made him an unfit boyfriend.

Ultimately, the two do seem to be a couple though, thanks to an Instagram post from Davidson Wednesday afternoon.

“The Chamber of Secrets has been opened…” he joked beneath a photo of he and Grande sporting Hogwarts robes.

It’s clear that Davidson’s decked out in head-to-toe Gryffindor gear, like Harry himself. And while Grande’s robe is a little tougher to discern, she confirmed in a post of her own that she’s a Slytherin:

in case u forgot

Between this and Neville Longbottom marrying a fan he met while she was working at the theme park, it’s a big week for Harry Potter-related love stories.