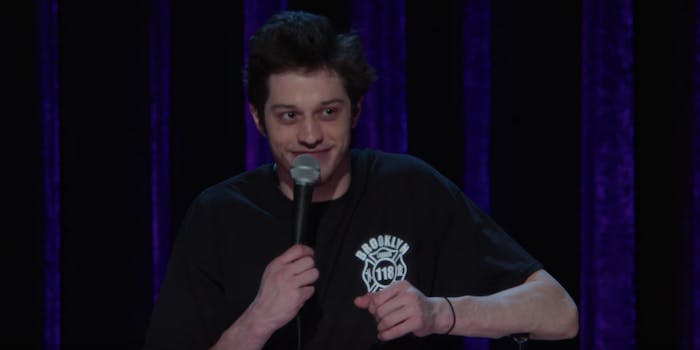 Pete Davidson opens up about dating with borderline personality disorder

After some recent romantic drama landed him in the Hollywood hot seat, Saturday Night Live‘s Pete Davidson opened up in his Instagram Story about what it’s like to date as someone living with mental illness.

The typically low-profile 24-year-old comedian found himself in the gossip cycle last week after it was reported he’d ended his years-long relationship with Larry David’s daughter Cazzie to start spending time with Ariana Grande. The pairing happened after the pop star’s recent appearance on SNL, and shortly after her own split from the troubled rapper Mac Miller. Grande recently took to her Notes app to explain her decision to break up with Miller, and it looks like Davidson has taken a page from his new fling’s playbook.

In an Instagram Story over the weekend, Davidson shared that the public reaction to his borderline personality disorder had motivated him to speak up.

“I been hearing a lot of ‘people with bpd can’t be in relationships’ talk. I just wanna let you know that’s not true,” he wrote. “I encourage those who struggle to seek help as well… it has changed my life for the better.

“I’m simply writing this because I want everyone out there who has an illness to know that’s not true,” he continued. “Mental illness is not a joke it’s a real thing… For all those struggling I want you to know that I love you and I understand you and it is going to be okay. That’s all.”

Davidson first spoke publicly about his mental health in October, roughly a year after he was diagnosed. He called 2017 a “fucking nightmare” at the time, but based on this message to his fans, it seems like he may be in a better place.