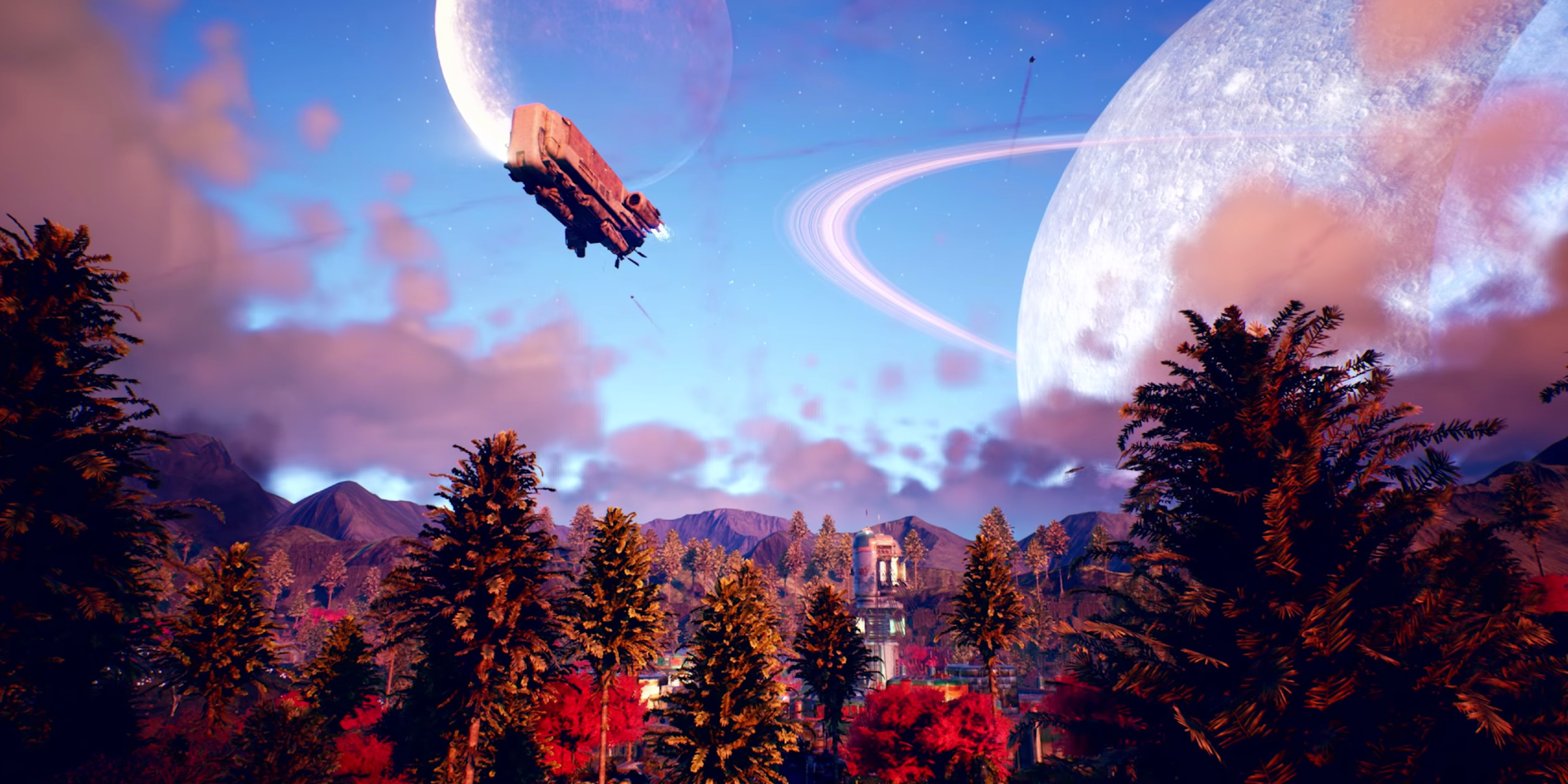 If you've never tried it out, 'The Outer Worlds' might be just the escape you're looking for.

Obsidian’s late 2019 release, The Outer Worlds, welcomes players into the vast reaches of space. Unlike No Man’s Sky, which provides a staggeringly large world but stumbles when it comes to base level enjoyablility, The Outer Worlds is reasonably simple to understand and immensely enjoyable, even for newcomers to video games.

One of Obsidian’s most promising releases, The Outer Worlds plunges players into a stunningly gorgeous hyper-corporate universe. Humorous dialogue helps cement genuine, well-rounded characters, and the frighteningly capitalistic world feels like a stark commentary on current American society. Well-oiled controls and a simple upgrade system combine with The Outer Worlds‘ colorful and diverse worlds, believable characters, and organic storylines to create arguably the most promising new franchise to hit the video game market in years.

If you’ve never tried it out, The Outer Worlds might be just the escape you’re looking for. The price is still pretty painful—it hasn’t dropped from its initial $60—but Obsidian’s newest release has enough enjoyment packed in to make it well worth the cost. Whether you’re starting your very first save file or returning to an old game, these tips and tricks will make your next voyage into the unknown a bit more enjoyable.

Crank it up a notch

Gamers are familiar with the process of starting a new game. Typically, it involves such mundane tasks as adjusting brightness settings and selecting language and difficulty level. For most, a new game will be played on the default difficulty, with later saves venturing into more difficult modes. I would advise against this tactic when it comes to The Outer Worlds.

The default difficulty will present little to no challenge to most players. This is likely a purposeful decision by Obsidian, given the game’s dialogue-centric approach. The Daily Dot’s own review noted that “conversations are often better than combat,” which seems to be exactly how developers intended this game to be enjoyed. Still, if you’re in any way familiar with first-person shooters, the combat will quickly reveal itself to be laughably easy. To avoid quickly losing interest any time weapons are drawn, consider starting your game on at least “hard” difficulty.

For non-completionists, the first several areas of any game are little more than a necessary grind blocking the path to more interesting things. In The Outer Worlds, the first few towns will seem to fit this expectation precisely.

But don’t fall into the trap of sprinting through the beginning to move on to other worlds. The first few towns are awash with NPC’s eagerly awaiting the opportunity to load you up with random side quests. They may not be the most interesting quests the game has to offer, but these early missions are exactly what low-level characters need. They typically require little more than wandering the town and conversing with people, but they will load you up with precious XP before you wander into the far more dangerous wider universe.

Conversation is massively important in The Outer Worlds. This game is practically drowning in NPC’s with witty one-liners, simple side-quests, and important information. The more people you talk to, the more quests you discover. It’s a simple, enjoyable formula.

For this reason, you should heap as many perk points as you’re willing to spend into Dialogue. There are plenty of reasons to do so, from expanding your dialogue options—and therefore the number of witty retorts you can fire back—to getting more cash when you turn in a mission. Plus, a high persuasion can help you avoid combat when desired, and even convince unlikely people to ally with you.

There are quite a few potential companions wandering around The Outer Worlds. Each one is a well-fleshed character with a unique backstory and specific skills. As you gradually collect your crew, there are a few things you should keep in mind.

The number of alterable options in The Outer Worlds might seem daunting at first glance. You can make adjustments to almost everything, down to how your companions behave.

When you go through your companion page, you’ll be able to view a breakdown of their stats, skills, perks, and behaviors. Altering these to match the playstyle you are aiming for can massively enhance your experience. Going for a sneaky, subtle game? Adjust your companion’s weapons and behavior so that they won’t initiate a fight while you’re mid-sneak, and make sure they keep their distance. Looking to blast enemies away? Hand Parvati a shotgun, instruct her to attack aggressively and close the distance between herself and enemies.

Each companion, on top of their stellar company and the extra firepower they lend, also comes with specific combat abilities. These are unlocked once you’ve put 20 points into Leadership, and are honestly invaluable. Not to mention how much amusement they lend to fights.

Prioritizing leadership early on will allow your companions to be far more useful later on. Once their combat abilities are unlocked, each character will add a few helpful and very entertaining new moves to your next violent encounter. It’s well worth it just for the amusement of watching your side-kick unleash their new ability on some unsuspecting marauder.

Much like Fallout 4, each companion in The Outer Worlds has their own set of quests players can choose to complete. Fulfilling your loyal friend’s deepest desires is a privilege all in itself, but there are some big perks to completing each followers’ specific side quests.

The typical horde of items and cash comes along with any of these quests’ completion, but you’ll also gain a specific perk for each crew member quest you complete. Ellie’s quest, which completes when you reunite her with her parents, results in a perk that halves the cost of bribes. Plus, with each successful quest, your crew members will become all the more undyingly loyal.

Most games ignore the inevitable long-term damage that a gun-toting mission across the solar system would surely inflict. Such is not the case with The Outer Worlds, which utilizes an intriguing, dynamic flaw system that responds to your in-game actions. A particularly brutal hit or long fall could result in permanent damage, which you can specify.

These flaws are offered up by the game, however, not required. Accepting a new flaw will earn you extra perk points, but be extremely cautious when taking on flaws. Some of the offered flaws may seem a minor inconvenience early in the game, only to prove impossibly difficult later on. You’ll also be offered a number of flaws throughout your play-through, so you don’t necessarily want to jump on the first one the game offers. Flaws that suit your character more will almost certainly arise later on, and you’ll be grateful you waited.

The process of healing in The Outer Worlds is quite simple. The Inhaler pumps life-saving drugs into your system whenever needed. It even allows for higher dosages as you climb in skill. Eventually, you’ll be able to load up to four items into the Inhaler. Adreno, a healing drug, is equipped by default.

What many players don’t realize, however, is that you can load other drugs into the Inhaler for a far broader range of effects. You can throw anything from cigarettes to food into the Inhaler to gain a broad range of buffs including enhanced strength and aiming. To change up the Inhaler system’s contents, head over to your inventory menu.