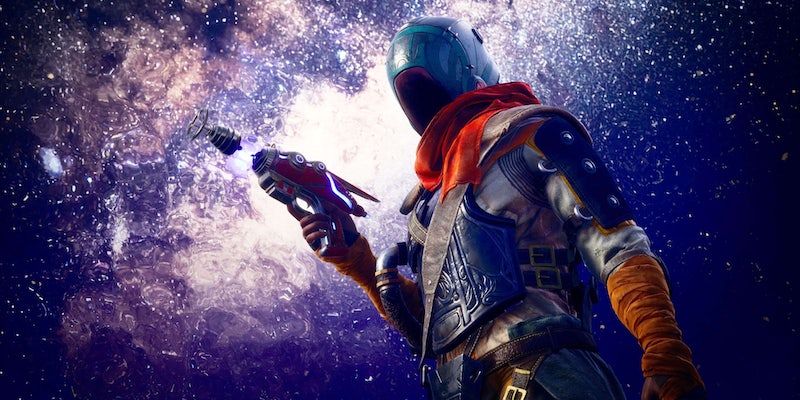 Review: The Outer Worlds is so much more than ‘Fallout in space’

In this sprawling, surprising adventure, conversations are often better than combat.

A few hours into The Outer Worlds, I was conflicted.

In an effort to restart my stranded spacecraft, I needed to locate a power source. Doing so was simple enough. But, to obtain it, I’d need to divert energy from one of two communities located on the planet Terra 2. Edgewater, a struggling industrial haven, was kept afloat by a prosperous cannery. However, a group of mistreated workers had relocated to a botanical garden on the far side of the planet, sustaining their small community on local farming. The leaders of both tribes were cantankerous, locked in a feud—and steadfast that I betray the other.

Members of each group made compelling arguments as I toured around. In the end, I knew there was no easy way to get out of this one. But some of the deserters had aspirations to work in engineering roles, rather than return to the laborious dealings of the cannery. After routing power away from the self-contained campsite, I was able to broker a deal and bring them back to town.

But Adelaide, the deserters’ leader, refused to follow. I knew I was leaving her to die out in the wilderness alone. I knew I could not convince her otherwise. The game would not let me.

Despite my complicated feelings, one thing was immediately clear: I was loving what The Outer Worlds has to offer.

Developed by Obsidian Entertainment, with a great number of writers, designers, and artists who worked on Fallout: New Vegas, this game is upfront about what it wants to be. A throwback role-playing adventure, The Outer Worlds is all about accommodating each and every player who picks it up. Right at the start, a robust character creator allows you to tailor the precise person you wish to become. You’re able to divide points between stats like leadership, determination, and persuasion as well as skills with melee and ranged weapons.

Your avatar is woken from a deep sleep by Phineas Vernon Welles, an energetic rogue scientist (with quite possibly the most name anyone has ever had). Welles tasks you with investigating The Board; an ominous organization that oversees almost every corner of the known universe. See, this adventure takes place in a fictionalized timeline fractured out from real world history. It presumes Theodore Roosevelt never became President of the United States and worked to bust up large companies in 1901. This leads to the dystopian, hyper-capitalist state we find in The Outer Worlds.

Corporations control everything in The Outer Worlds. Every gun, every tonic, every helmet you encounter is packaged and branded by one of these ruling bodies. Your quests often involve navigating the tense relationships between each monolithic entity—and the people they rule.

One of the first characters I encountered on my quest was a guard named Phelam, who worked for Spacer’s Choice; a low-budget adventurer’s outlet. He was injured, scared off by local criminals. But most significantly; he was ashamed to have failed his boss. His dialogue revealed a sickening reverence for the company and some serious Hermione Granger-esque “we could be killed, or worse, expelled” energy.

In moments like this, The Outer Worlds uses a political fixation for more than mere set-dressing. Investigating the corrosive effects of monopolistic expanse and cosmic colonization are the crux of your adventure. For the course of the main narrative, the game is laser-focused on letting you build meaningful relationships and delights in forcing you to grapple with compromised choices.

These conversational mechanics, and the writing behind them, are far and away my favorite aspect of The Outer Worlds. The game’s dialogue options instill the player with a responsibility that’s never as transparent as a single meter to represent your reputation. Digging through multiple discussions with certain characters may reveal new questlines, but the game is rarely explicit about when and where they might pop up. Instead, the game implies real weight with almost every line you can choose to say (or not say).

This reveals another strength: The Outer Worlds is funny as hell. Written with more than just pop culture references in mind, characters often poke fun at their surroundings and lead such bland, corporate-controlled lives that you have to laugh. Humor is often hard to land in games, particularly with a glaring dissonance between the player’s possible actions and a rigidly written character’s given nature. But Obsidian’s team members are experts when it comes to building a strong suite of role-playing options, and The Outer Worlds trusts you to occupy a wide range of personalities. You could be a snarky space pirate or a taciturn captain, and the game is always ready to roll with it.

At every opportunity, The Outer Worlds elects to react to the player’s presence. You feel like an active participant in an ongoing story: an outside mediator stepping in to bridge the divide or a wrecking ball that’s come to raise hell.

For example, dozens of hours down the road, I returned to Edgewater. The deserters had assimilated into town with no problems. Thomas, one civilian who was helpful in convincing the group to come home, was working as an engineer, just like he’d always dreamed. But I journeyed back to check on Adelaide, and she would not speak to me. There she was, slowly wasting away in an empty encampment. And it was my fault. The Outer Worlds isn’t afraid to close off “content” based on the consequence of your actions—and it’s stronger for it.

But how does all this affect gameplay? The Outer Worlds isn’t just about talking to people (even if that’s what it does best). I have to say, the combat is admittedly the weakest portion of the experience. While there are a fun variety of weapons, most of the gunplay feels flatly like a point-and-shoot scenario. With tougher encounters, I elected to pick up a long-rage weapon rather than getting up close. Melee weapons, like clubs and spears, similarly just sweep in front of you as you pull the trigger. However, I began as a jack-of-all-trades, focused on leveling up my hacking skills and stat perks rather than proficient weapon-handling, so your experience may vary.

Likewise, the branching skill tree for you and your companions opens up multiple styles of play. You can optimize damage-per-second, build an efficient team that buffs one another, or just go it alone if you choose to. It’s easy to feel overwhelmed by the scope of options in every menu (and the tiny on-screen text does not help). But The Outer Worlds is usually upfront about what you’re signing up for. Dumping points into a certain skill translates to a felt bonus, whether it’s more dialogue options, easier hacking, or quicker healing. A great new system hands out phobias, recognizing things you’ve had trouble with in the past and allowing you to make them a permanent handicap in exchange for more perk points. My character had more than a few misadventures falling off the side of a cliff, so I ended up taking additional fall damage as a trade-off.

A single playthrough of this story may not be as dense as a traditional Fallout title, but it’s meant to encourage multiple runs. I was constantly imagining the other side of conversations, or a version of my character with totally different stats. In terms of replayability and tailored customization, The Outer Worlds is overflowing with possibility. It helps, too, that most of the interstellar environments look fantastic, with a wide array of color and visual flair.

Put simply: The Outer Worlds is everything you’d want from a modern RPG. There’s no “right” way to play, and there are no easy decisions. At least, the game doesn’t seem to think so. It provides a well-realized, organic universe to explore and allows you the freedom to choose your way through gorgeous environments and complex conflicts. I already want to tour the solar system as a different explorer and see what else the game is hiding beneath the surface. It marks a tremendous achievement from one of the most accomplished developers in the genre.

The Outer Worlds is available for PC, PlayStation 4, and Xbox One on Oct. 25. It will arrive on Nintendo Switch sometime in 2020. This review was written based on a PS4 version of the game provided by the publisher.