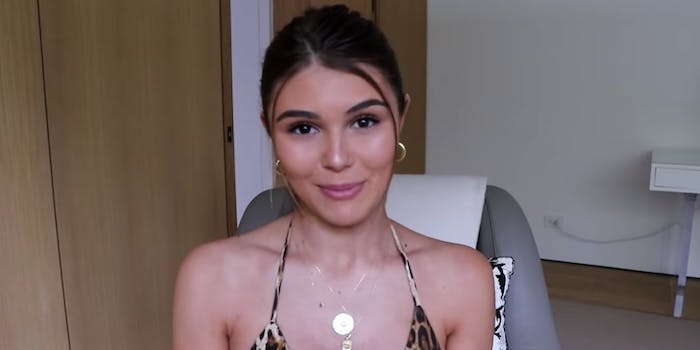 She's calling out the haters. But social media users aren't so charmed.

Olivia Jade is back on Instagram and she has a clear message for the haters.

In a recent Instagram photo, Jade, 19, poses with her middle finger high in the air, while tagging various media outlets in the caption. Most notably, she highlighted the publications that have been covering her parents’ involvement in the college admissions bribery scandal.

Jade was thrown into the spotlight this year after it was revealed that her famous mom Lori Loughlin had allegedly bribed officials at the University of Southern California in exchange for the sisters’ acceptances into the institution.

Though it looks like she received a lot of support from her peers—including other social media influencers such as Tana Mongeau and Kylie Jenner’s best friend Anastasia Karanikolaou—people on Twitter were less than impressed with Jade’s sudden comeback into the public eye.

“I’m not even trying to sound sensitive but higher education is already geared towards the privileged and she took someone’s spot who could’ve been someone underprivileged looking for nice education her and every other person whose family has brief their way in suck lol,” tweeted @soiecouture.

“she acts like she’s a victim because the media reported on her cheating her way into university… okay,” responded @pradaduchess.

“keep that privileged brat Olivia jade and her middle fingers off my timeline,” said @houseofhazel.

keep that privileged brat Olivia jade and her middle fingers off my timeline.

“This is what privilege looks like. Her mom is going to jail because of how incompetent she is and this is her attitude. Fuck Olivia Jade,” said @MichaelBePetty.

This is what privilege looks like. Her mom is going to jail because of how incompetent she is and this is her attitude. Fuck Olivia Jade. pic.twitter.com/GSXo2YuhT5

“to all the Youtubers who hyped Olivia Jade’s recent post fuck y’all… what her and her family did fucked over hard working students who deserved her spot… y’all “social media influencers” could NEVER understand,” said @angldll.

“this pic of olivia jade has all her influencer friends hyping her up like she’s not a shitty person lol,” tweeted @cacasmiddlename.

this pic of olivia jade has all her influencer friends hyping her up like she’s not a shitty person lol pic.twitter.com/uDtVQK3LpN

Jade is also receiving backlash because apparently, the photo she posted is only allowed to be commented on by people she follows—which is a total of 564 people, compared to the 1.4 million who follow her.

This perhaps explains the influx of YouTubers and Influencers commenting on the photo.

“there she is,” said Karanikolaou underneath the Instagram photo.

“oh……my………god i am speechless,” commented Mongeau.

“not over you and this – QUEEN,” commented Jade’s sister Isabella Giannuli, who was also involved in the bribery scandal.

Jade and her sister have been making a slow comeback to the public eye, with both recently posting tributes to their mother, Lori Loughlin, for her birthday on July 28,

one day late. happy birthday. i love you so much ❤️

Others who were charged and involved with the scandal, including actress Felicity Huffman, have already pled guilty to the charges. However, Loughlin and husband Mossimo Giannuli chose to reject the plea deal offered to them and fight the charges.

Jade, who at the time was a YouTuber and upcoming Instagram influencer, was hit especially hard by the scandal after a video emerged of her saying she only wanted to party in college. Since the scandal broke, she has been relativity quiet on social media and lost multiple sponsorships, including lucrative deals with Sephora and Amazon.

In the past few months, rumors have circulated of a rift between Jade and her mother including reports that Jade had moved out of the family home in Bel Air.

An alleged insider told US Weekly that “[Olivia] is not talking to her parents right now. [She] feels she is the victim … Olivia blames her mom and dad for this scandal and for the downfall of her career.”

However, Jade’s social life has not suffered from the scandal, as the teenager has been snapped leaving night clubs and partying with her fellow YouTube friends since the scandal broke.

In a report published by Entertainment Tonight last week, another source had told the publication that Jade had “no plans to return to USC” and that she “never wanted to attend USC to begin with.”

“Right now her goal is to rebuild her brand and her business,” the source told ET.

The so-called source also touched on Jade’s relationship with her mother, stating:

“Lori has apologized many times to her girls and has told them that she only wants the best for them. Olivia has forgiven her but she still carries some resentment because she realizes that this scandal has marked her and will never entirely go away. The girls are definitely scared for their mother and father. Until the court date has passed, they are just trying to get through the summer.”

Her parents face nearly 40 years in prison if convicted and are set to appear in court Aug. 27.