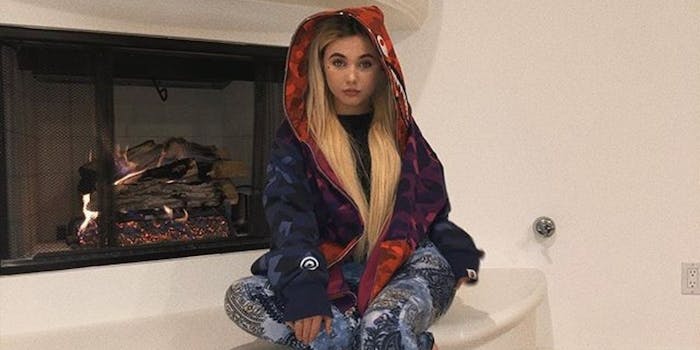 'Ok but u understand I'm a child?'

Blink-182 drummer Travis Barker has said he was “disgusted” to find out Echosmith drummer Graham Sierota has been messaging his 13-year-old daughter in private on Instagram, according to various reports.

Screenshots shared by the Blast shows Sierota messaging the teenager “Hi” twice in September 2016 with no response. He later says, “By the way I’m Graham from echosmith and I think ur [sic] beautiful.”

He then sent her an invitation to an event in July, to which Barker responded, “Ur like 40.”

To this, Graham apologized and clarified his age, “I just wanted to say i really like ur music and sorry for messaging and I’m 20.”

“Ok but u understand I’m a child?” Barke wrote.

She then shared the screenshot on her Instagram story and shared with her nearly 300,000 followers. “Hey guys! So once I again I am bringing this to your attention because I’m a 13 year old girl and he is 21/20 super creepy,” she wrote.

Her dad called the behavior predatory. “When I found out a 20 year old man was trying to get in touch with my 13 year old daughter by filling her Instagram messages with party invites and compliments I was disgusted,” Travis Barker told the Blast. “That’s predatory behavior and there is nothing cool, normal or OK about it at all.”

Graham has since expressed his regrets through a statement to pop-culture and entertainment website Just Jared, explaining that he was inviting her, along with others, to his parents’ family BBQ party.

“It wasn’t until she responded that I realized her age at which point I apologized to her,” he said. “I’m really sorry and feel very badly about this. I didn’t realize she was a minor and assumed she was my age. I made a careless mistake and this is a big lesson for me. I would like to apologize again to Alabama, her dad Travis, and her family.”